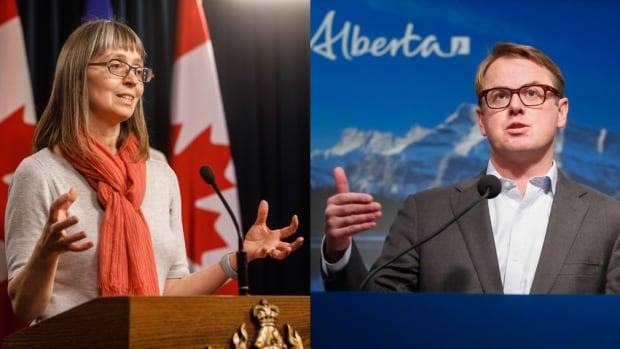 More than one million people in Alberta have now been tested for COVID-19, the province’s health minister says.

Tyler Shandro kicked off a new conference on Monday by announcing the milestone.

The latest update shows that laboratories had tested 1,001,638 people by the end Sunday.

“This is a big number and a remarkable accomplishment for our health-care system,” Shandro said. “We know that testing is crucial to winning the fight against COVID-19. Timely and accurate testing lets our health system identify cases quickly.

At the start of the pandemic, Shandro said, provincial labs had the capacity to run a few hundred tests per day.

“Since then, we’ve developed the strongest and most dynamic testing program in the country,” the minister said. “While other provinces have faced massive lineups, or consistently narrow testing criteria, Alberta has been a leader.

Alberta was among the first provinces to open up testing to all travellers, Shandro said, and was the first to offer asymptomatic testing and the first to work with community pharmacies to expand capacity.

“Alberta has now conducted more tests per capita than B.C., Ontario or Quebec,” he said. “We all should be proud of what our labs have accomplished.”

Province hopes to speed up results

Shandro thanked public health officials at AHS and Alberta Precision Labs for the hard work they’ve done over the past six months.

“I also want to thank every Albertan who has been tested for COVID,” he said. “Thank you for doing your part to protect yourself, your loved ones and your community.”

The government will continue to work to strengthen the lab system, to reduce wait times and speed up test results, he said.

By end of day on Sunday there were 1,549 active cases, with 63 people being treated in hospitals, including 15 in ICU beds.

The regional breakdown of active cases was:

Four more deaths were reported to Alberta Health over the weekend, bringing the total to 265.

Two of the deaths — a man in his 80s and another in his 90s —were linked to an outbreak at the Millwoods Shepherd’s Care Centre in the Edmonton Zone. A total of 19 residents and five staff have tested positive, the facility said on its website.

AHS is working closely with the operator of the care centre, Dr. Deena Hinshaw, the province’s chief medical officer of health, said on Monday.

As part of the work, AHS staff have visited the centre, she said, which is standard practice for all sites with outbreaks. Testing is being offered to all residents and staff.

“I’ve been assured that all necessary steps are being taken to limit future spread.”

A man in his 70s from the Calgary zone also died, while the fourth victim was a man in his 60s in the Edmonton zone who was not in continuing care.

“On Friday, I developed a sore throat and was tested for COVID-19,” she said in a tweet. “I received my negative result but will remain at home until my symptoms resolve.

“As I’ve said before, staying home while sick or experiencing mild symptoms is important. Especially as we head into influenza season, we can help protect our loved ones by staying home until all our symptoms are gone.”

A breakdown of the testing numbers shows that 56 per cent of those tested have been female, while 44 per cent were male.

The province has ramped up testing recently. Over the past two weeks, laboratories completed 181,461 tests, an average of 12,961 each day.

Here are the test numbers for the past two weeks.

During the two weeks in late April and early May when new daily cases were peaking, laboratories completed 59,298 tests, an average of 4,235 each day.