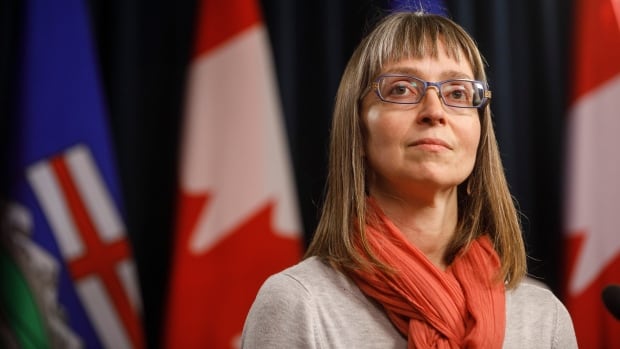 With case numbers on the rise over the past few days, Premier Jason Kenney had a blunt message for Albertans who have stopped following public health guidelines intended to slow the spread of coronavirus.

“Knock it off!,” Kenney said at a new conference where the province reported two more COVID-19 deaths and 141 new cases of the illness.

The latest update from Alberta Health shows the province has reported 509 new cases over the past four days.

“We should all be very concerned about the recent rise in active COVID-19 cases and hospitalizations in Alberta,” Kenney said, moments before he announced that 750,000 K-12 students will be heading back to school at the end of the summer.

The premier said Albertans have made “countless sacrifices” to slow the spread of coronavirus and protect the people who are most vulnerable.

“But it looks like some folks are no longer observing the public health guidelines,” Kenney said.

“Maybe that’s because some people have just become tired of this whole thing, and we could all understand that. Or some believe that the threat of COVID-19 is exaggerated. Maybe some young healthy people aren’t worried about getting sick themselves.

“But whatever the reasons, the results are troubling. And so today, I plead with Albertans not to give up on the progress that we’ve made. The last thing we want to have to do is reimpose damaging restrictions on our economy and our freedoms.”

The COVID-19 pandemic likely won’t be over for months, the premier said.

“So let me be blunt. If you think you can socialize with large groups of people in close quarters, knock it off. If you’re young and healthy, remember you could still carry and transmit the virus that ends up killing someone who is old or vulnerable.”

Kenney urged people to “get back to the basics,” washing or sanitizing their hands frequently, staying home if they’re sick, maintaining two metres of physical distance whenever possible, and wearing masks where that’s not possible.

“We’re not expecting perfection. Probably no one is going to follow all of these guidelines all of the time. But let’s just do our best to show care for others. That’s the Alberta way.”

Most active cases in months

The most recent reported deaths were a woman in her 80s in the Calgary zone and a woman in her 70s, whose death was linked to an outbreak at the Good Samaritan Southgate Care Centre in Edmonton.

That brings the total number of deaths to 172.

As of Tuesday’s update, the province had 1,193 active cases of COVID-19, the highest total seen in more than two months.

Across the province, 93 people are in hospital being treated for the illness, 16 of them in ICU beds.

The regional breakdown of active cases on Tuesday was:

Kenney was joined at the podium by Dr. Deena Hinshaw, Alberta’s chief medical officer of health, and Education Minister Adriana LaGrange, who offered details about the province’s plan to return to in-school classes for the 2020-21 school year.

Hinshaw echoed the premier’s words, saying she too is concerned about the continued rise in active cases and is watching the situation closely.

“COVID-19 isn’t going anywhere,” she said. “It’s on all of us to adopt the public health guidance and protect each other. This weekend, beaches around the province showed us that this is possible. Two weeks ago, we had widespread reports of overcrowding, inadequate physical distancing and general disregard for public health measures in place.

“Last weekend, we saw clear improvements, thanks to co-ordinated efforts by beach communities like Sylvan Lake, Chestermere and Alberta Beach, as well as health officials and law enforcement.”

Since the start of the pandemic in March, Alberta laboratories have conducted 598,317 tests, a rate of more than 115,000 tests per one million population.

Among Canadian provinces, only Ontario (with 125,317 tests per million) has conducted more tests per capita, according to Government of Canada epidemiology update released Monday.