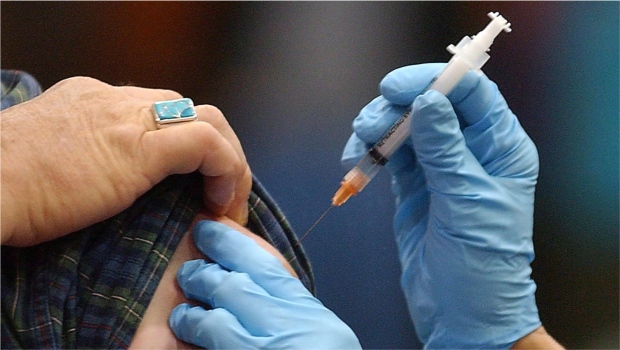 TORONTO — Fears are mounting among doctors about the possibility of a so-called ‘twindemic’ consisting of duelling flu and coronavirus outbreaks. They are concerned they won’t be able to administer enough flu vaccinations and ease the burden on the health-care system.

Dr. Richard Hamat, a pediatrician at the Vaughan Pediatric Clinic in Ontario, said he’s bracing for an unpredictable fall and winter this year with patients expected to come in exhibiting symptoms of both COVID-19 and the seasonal flu.

“We’re worried about the combination of influenza and coronavirus and how that’s going to affect our hospitals and our kids who get sick and our kids who may spread things around their families and others,” he told CTV News.

And while both illnesses share similar symptoms, such as cough and fever, the flu is largely preventable thanks to annual vaccines.

“I think it’s essential every year, but this is the most important year. I’m telling parents ‘if you don’t normally get a flu shot, get one this year,’” Hamat said.

Hamat’s advice is expected to be loudly echoed by public health campaigns across the country urging Canadians to get their flu shot this year amidst the COVID-19 pandemic.

Dr. Gerald Evans, the medical director of infection prevention and control at Kingston Health Sciences Centre in Ontario, said there’s “great potential” for an influx of complicated cases of COVID-19 and the flu to overwhelm emergency rooms and doctors’ offices.

“If you have a flood of adults and older individuals coming in with COVID-19 during a second wave and then you’ve got lots of children and older adolescents affected by a bad seasonal flu, you’re looking at a kind of double whammy on the health-care system,” he explained.

Despite the concern over simultaneous virus outbreaks, some doctors actually believe the seasonal flu may not be as severe this year thanks to the adoption of recent public health measures, such as physical distancing and increased handwashing.

For example, in Australia, which is just coming out of its winter flu season, rates of influenza have been down in comparison to previous years.

Ian Barr, the deputy director of the World Health Organization’s Collaborating Centre for Reference and Research on Influenza in Melbourne, Australia, said they have never seen influenza numbers this low before.

“We have seen very little influenza since the end of March when lockdowns and various social distancing measures started,” he said. “It’s been the complete opposite of last year.”

Barr said he was pleased with the low infection rates, which he described as a “silver lining to the very dark cloud of COVID-19.”

The good news in Australia bodes well for Canada and other countries in the Northern Hemisphere where scientists often look to southern countries and their experience with the flu for clues as to what will happen during the upcoming fall and winter.

And while the subdued flu season in Australia and other southern countries may be promising, many health-care professionals in Canada don’t want to depend on that happening here with many instead urging for higher flu vaccination rates.

Dr. Kieran Moore, the medical officer of health for the Kingston, Frontenac, Lennox and Addington Public Health Unit in Ontario, said he’s hopeful adherence to public health guidelines will result in a less severe flu season, but he still thinks flu vaccinations will be the difference maker.

“So 40 per cent is our annual uptake [of flu shots] across Canada,” he explained. “If we had it up to 50 or 60 per cent that would be a significant proportion of the population protected. For a virus like influenza, if you can get 60 per cent of your community vaccinated, you’re almost building a herd immunity against influenza.”

Hamat, who normally vaccinates approximately 6,000 children a season, agrees that the more people are vaccinated, the easier this year’s flu season will be, which is why he’s anxious to start providing them to his patients as soon as possible.

“I feel very worried that the number of kids who need to get vaccinated are not going to be able to be properly vaccinated in a timely manner,” he said.

Because hospitals and clinics are limiting the number of patients they can see in a day in order to maintain physical distancing, it will be harder for health-care workers to vaccinate as many people as they would like to during this time.

“There’s no plan for it and yet the vaccines are meant to be distributed in the next three or four weeks, and we won’t know where to tell patients to go to get these immunizations done,” Hamat said.

With the expectation of an increased demand for influenza vaccines this year, the National Advisory Committee on Immunization, which is part of the Public Health Agency of Canada, is recommending provinces and territories consider alternate methods for delivering the shots, such as allowing pharmacists and paramedics to provide them in order to avoid lineups and overcrowding at clinics and hospitals.

The committee also suggests that vaccines be offered during senior shopping hours at pharmacies and grocery stores or even outdoors, including in drive-thru clinics and parking lots. The vaccines could also be provided at retirement homes, shelters, and group homes to reduce the crowds at clinics and hospitals.

The health agency has also ordered 13 million doses of the flu vaccine this year – compared to 11.2 million in 2019 – in preparation for the demand.

The government’s flu vaccination plan can’t come soon enough, according to Moore and Hamat and other doctors who are eager to being vaccinations.

“We have to get the vaccine early,” Moore said. “Traditionally, we get it in late October, I’d like it a little earlier and I’d like our community to embrace immunization for influenza this year so we have the most tools used for prevention strategies heading into what could be a difficult winter with COVID-19.”