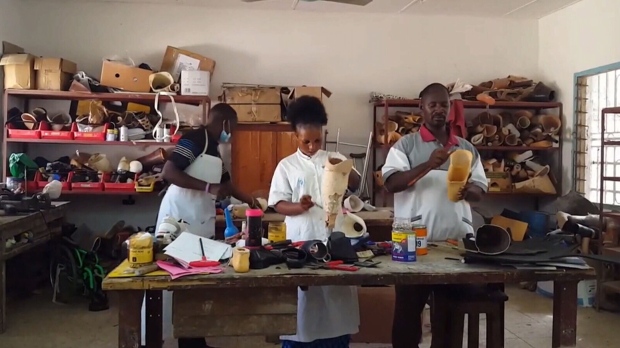 TORONTO — Iahnijah Opaleke knows how important having access to prosthetic legs is.

From early childhood, he had to learn to walk with the aid of an artificial limb, his own leg growth stunted by a rare disorder that made his right leg 70 per cent shorter than his left.

His mother, Tina, made sure he had prosthetic devices that would let him play and dance.

“My running blade and my other prosthetics have really helped me,” Iahnijah told CTV News, adding that he’s been able to play basketball and other sports.

However, the family knows other disabled children aren’t as lucky.

In order to help out, Iahnijah has donated his old prosthetic legs through a charity he founded that uses the same acronym as his condition: PFFD.

Prosthetics for Foreign Donation Inc. helps deliver used prosthetics to those in need all over the world. The movement started with a trip he and his mother took to Jamaica, where Iahnijah tried to offer his prosthetic to a man with both legs amputated who was using a skateboard for mobility.

“I feel it’s something really good to do for other people,” Iahnijah said.

PFFD works with other organizations to donate prosthetics in Nigeria, Tanzania and Mumbai, according to their website.

One of the big developments came four years ago when they joined forces with a British charity called Legs4Africa, which was already refurbishing discarded artificial limbs so they could be sent to regions of Africa where artificial limbs are hard to come by.

The charity was founded by Tom Williams, a professional photographer. His own world changed after he brought a discarded prosthesis from his home in England to an amputee he met in the Gambia while on assignment.

“Seeing how that not just changed his life, but the whole family — it lifted a huge burden off their shoulders,” he told CTV in 2018.

Since then, interest has exploded across Canada.

“We heard about amazing work that they were doing in the U.K.,” Tina Opaleke said. “That’s exactly what we wanted to do, where we wanted to go with with our charity work, so they’re just such an inspiring group.”

He told CTV News that he heard of Legs4Africa around a year ago.

“I had come back from a trip to West Africa in a country called Niger, and we were doing a lot of amputations there,” he said. “It was very difficult because a lot of people were losing their legs, young people of all age groups.”

After someone goes through an amputation, their life can become significantly more difficult because of the sudden loss of mobility, he added. Once back at home, he did some research to see if there was a way for him to help from Canada. He found Legs4Africa and decided to reach out.

Now, Canadians have another place they can send their used artificial legs. They can give them to Mackenzie in Corner Brook, N.L. — home to the Canadian Legs4Africa office.

“We’ve received about 200 legs here,” Mackenzie said. “It’s recycling, it’s using something that otherwise is going to go to the dump and never be seen again.”

He wants to raise awareness for the project so that the number of donated limbs can grow.

“We really want to get the word out to Canadians, what [they] can do and how they can become involved in collecting the legs, get the word out in the medical community and the prosthetic community, the rehabilitation community,” Mackenzie said. “So that their people know we can use these legs for a very good cause.

“We want thousands of legs to come from Canada to go to Africa.”

The legs are sent from Newfoundland to the charity headquarters in Bristol, U.K., where they are broken into parts, packaged and then delivered to amputees in 15 countries in Africa.

Donating a prosthetic limb for a person who may not be able to acquire one on their own, due to lack of access or price, can change their life, Mackenzie said.

“They may have lost the ability to make a living,” he said. “They’ve lost their independence. Their self esteem and value as a person has been compromised by the amputation often. So when they get a leg they have the potential to get all that back, so it can be totally life changing for that person.”

It certainly was for 17-year-old Mohammed Silla, whose leg had to be amputated after he stepped on some glass and developed an infection. He lives in the Gambia, and received an artificial leg from Legs4Africa, which has allowed him to go back to school — a step towards his dream of becoming a doctor.

“When I was told that my leg was going to need to be amputated, I was shocked,” Silla said. “If I was not having a prosthetic leg, I don’t think I would be educated, because I would not be given the chance to go to school.”

And after seven years, Legs4Africa is continuing to grow.

“What started with one prosthetic leg soon turned into 50, then 500,” Williams told CTV News in November. “And we have now been able to recycle about 10,000 prosthetic legs.

“I go to work every day because I absolutely love it, it’s a real passion of mine.”

Tina Opaleke said that as the mother of an amputee, she knows how important prosthetic limbs can be to a person.

“Knowing that you’re actually helping other children, mothers, adults be their best selves, it’s just like, that’s what we’re here to do in the world,” she said. “Our job is to help, so it just feels like fulfilling your purpose.”

Organizers from these charities suspect there are many thousands more prosthetics sitting in closets and basements, just waiting to be donated and turned into a gift like none other.