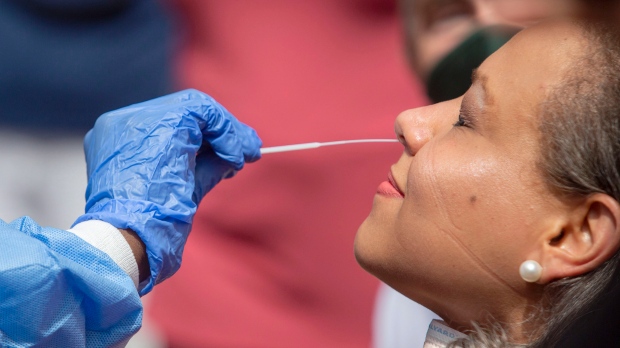 TORONTO — When Bonita Mak went to visit a friend in a country home outside of Toronto, she says she got a COVID-19 test beforehand to make sure she wasn’t putting the people around her in danger.

The 25-year-old had a social bubble, but decided on a test before meeting another friend and parents as the best way to escape her city apartment safely after months of being cooped up.

“I wanted to make sure I wasn’t asymptomatic and bringing it out there,” Mak said. “It seems like the best precaution to take.”

But while COVID-19 testing is easily accessible in Ontario, experts are warning about their shortcomings. They say tests can’t detect the virus during its incubation period, and still yield a considerable rate of false negatives.

“People might get a false sense of security with diagnostic testing,” said Dr. Isaac Bogoch, an infectious disease specialist. “The diagnostic test is only helpful for a small amount of time and it doesn’t really tell the whole story.”

Bogoch pointed out that there is an incubation period of four or five days after exposure during which the coronavirus is in your body but cannot be detected. It’s possible for a person to get a negative test during the incubation period, then become infectious as much as 14 days later when symptoms show up, he said.

Colin Furness, an infection control epidemiologist at the University of Toronto, said the test is about 65 per cent accurate. False negatives can happen if a patient had only got the virus very recently and it hadn’t multiplied enough to be caught by the nasal swab.

The swab test could also be done improperly or be bungled during lab handling, he said.

“The technology is sound, but you do not have really great accuracy, not really the kind of accuracy that you think of when you think of this kind of testing,” Furness said. “There’s a lot of opportunity to get negative tests and expose other people because you’re infected, and there was a problem with the test.”

Furness said the test is uncomfortable, and people might just say that they were tested when they weren’t. He compared the scenario to trusting a partner who says they don’t have a sexually transmitted disease.

“You’re devolving what is a scientific measurement to a question of taking someone at their word,” Furness said.

On Monday, Dr. Eileen de Villa, Toronto’s chief medical officer of health, said she understood people want to get back to regular life, but said tests are not a good way to do it.

“We have to recognize that a test is imperfect — it tells you what your circumstances are at a particular period in time,” de Villa said. “I appreciate that people do want to connect, but the more we’re able to stick to the public advice, the sooner we’ll be able to get back to those regular activities.”

De Villa’s comments came as Health Minister Christine Elliott pointed out that more than 50 per cent of new cases of the coronavirus in Ontario were among people 39 and younger, which she called a concerning trend.

But Mak said many young people around her are taking tests before going into social situations. She said she would still do so again before going on a prolonged trip with older people, but is doing her best to limit her interactions with others.

This report by The Canadian Press was first published July 21, 2020.