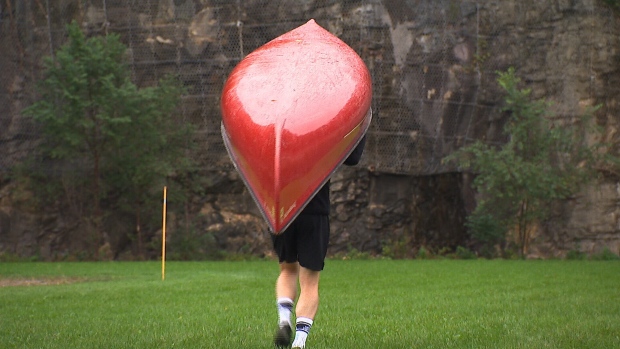 TORONTO — It may seem like an odd sight: a man trekking towards Montreal with a canoe on his shoulders, far away from the water.

Felix Jasmin was diagnosed with multiple sclerosis (MS) two years ago. Now, Jasmin and his team are on a 700-kilometre trek called Le Grand Portage, an 18-day expedition from Toronto to Montreal to raise money and awareness for multiple sclerosis.

“Our goal is to fight back at what hit me and what is hitting so many Canadians,” he told CTV News.

In Canada, 90,000 people live with MS, one of the highest rates in the world. The disease is caused by the immune system attacking the coating around nerve fibers, disrupting communication between the brain and the rest of the body, an issue that can lead to those with the disease losing the ability to walk independently. Currently, there’s no cure for MS.

“A lot more needs to be done in order to find a cure, and I see the Grand Portage as my way of contributing,” Jasmin said.

Jasmin set off a week ago on the trek, which takes the form of a relay. Forty teams take turns carrying a canoe on the journey between Toronto and Montreal, with each person completing roughly 13 kilometres.

Jasmin has been open about his battle with MS since he received his diagnosis in 2019. The diagnosis only came after he started to lose vision in his right eye and developed bladder issues, but troubling symptoms like tingling in his leg and loss of balance had surfaced long before then, as early as 2015.

“Getting my diagnosis actually came down as a big relief at first, knowing I hadn’t been crazy — quickly taken over by anger, sadness, scared,” Jasmin said.

One of the moments he dreaded the most was telling his three children.

Charlie, his 7-year-old, told CTV News that he’d asked if it was contagious.

Since then, the family has vowed to tackle the disease together.

They’re riding the momentum from last year’s inaugural event, where friends and strangers walked, ran, and showed their support from all corners of the globe.

The first year, the event was only virtual, but it still raised $370,000. This year, while Jasmin and his team physically carry the canoe, they have also set a day for others to participate virtually. On October 17, participants from across the planet are encouraged to run, walk or bike to show their support.

They’ve already beat their initial goal of raising $300,000 this year, having achieved around $307,000, according to their website. But there’s still time for people to continue donating.

“My message would be a message of hope, because in the last two decades there has been so much progress made with medication for MS, medication that slows down the disease,” Jasmin said.

He knows it will be a long road ahead — but it’s a journey he won’t be taking alone.