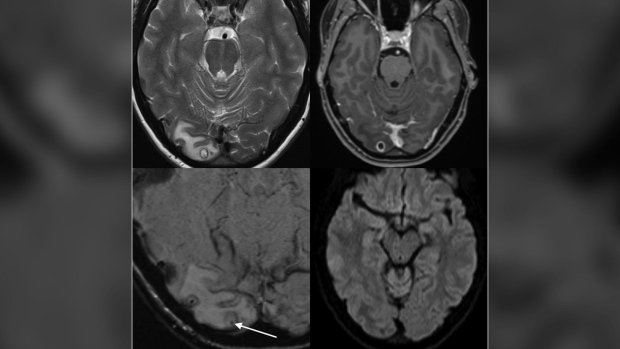 A 25-year-old woman in Australia discovered she had tapeworm larvae in her brain after suffering from a headache that lasted for more than a week.

The aches were caused by tapeworm larvae that had taken up space in her brain, according to a new study on her case by the The American Journal of Tropical Medicine and Hygiene published on Sept. 21.

The woman, who never traveled overseas, is the first native case of the disease in Australia, the study said. Previous Australian cases of this infection were from immigrants or returning residents who traveled to regions where the disease is endemic to, such as Africa, Asia, and Latin America.

For the past seven years, the woman complained of headaches that would occur two or three times a month and went away with prescribed migraine medication. However, her latest headache lasted for more than a week and came with more severe visual symptoms, including the blurring of her central vision.

An MRI of her brain led doctors to believe that a tumour might be the cause of her pain, but after operating and removing the lesion, they discovered it was actually a cyst full of tapeworm larvae. After the removal, she required no further treatment.

This condition is known as neurocysticercosis, which can cause neurological symptoms when larval cysts develop in the brain. People who get the parasitic infection do so by swallowing eggs found in the feces of a person who has an intestinal tapeworm, according to the U.S. Centers for Disease Control and Prevention (CDC).

Neurocysticercosis is deadly, and a leading cause of adult onset epilepsy worldwide, the CDC said.

Tapeworms typically take up residence in human’s intestines, an infection known as taeniasis, and some can pass on their own without medication. The parasite is commonly transmitted when people consume undercooked pork — pigs are often intermediary tapeworm hosts — or come in contact with food, water and soil contaminated with tapeworm eggs.

The woman, who worked as a barista, was considered to be at no or very low risk of infection with tapeworm larvae but is believed to have somehow accidentally ingested tapeworm eggs released from a carrier.

A man from Texas had a similar experience, suffering from splitting headaches for more than a decade that turned out to be caused by tapeworm larvae that became lodged in his brain’s fourth ventricle.

The best line of defence against similar infection is cooking meat to safe temperatures, washing your hands with soap before eating and only eating food you can ensure was cooked in sanitary conditions.