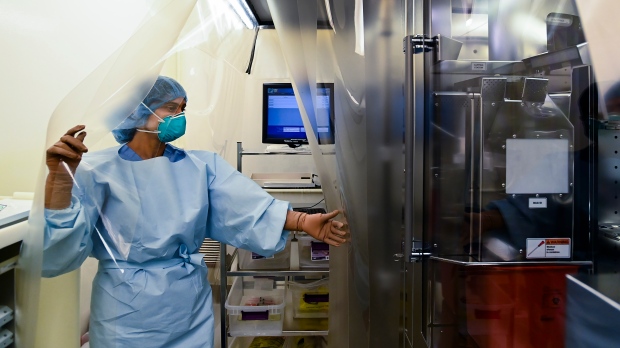 TORONTO — Feb. 4 marks World Cancer Day, and the Canadian Cancer Society says more needs to be done to address the delays in cancer screening and interventions due to the COVID-19-induced strain on the health care system.

Stuart Edmonds, the Canadian Cancer Society’s executive vice-president of mission, research and advocacy, says he expects to see a rise in late-stage diagnoses as screening appointments and surgeries keep getting pushed back.

“It’s just really concerning. When we see decreases in screening … we’re not having patients going into treatment when they need to go into treatment,” he told CTV’s Your Morning on Friday. “It’s really key that we actually continue with screening programs and trying to address the backlog and delays.”

The Canadian Institute for Health Information found that between March and June 2020, during the first wave of the pandemic, there was a 20 per cent reduction in cancer surgeries compared to the same period in 2019. Another report, published Tuesday in the Journal of the National Comprehensive Cancer Network, found that in Ontario, there was a 34 per cent drop in cancer diagnoses during the first waves of COVID-19 in 2020 compared to previous years.

Statistics Canada says mortality rates and incidence rates for all cancers have been slowly falling since 2011. However, Edmonds says that could change in the future with an influx of late-stage diagnoses.

Cancers detected at a later stage are often much more difficult to treat. A study led by Canadian researchers published in 2020 found that every month in delayed treatment leads to a 10 per cent increase in the risk of death.

McGill University PhD student Mélodie Cyr was one of the numerous Canadians who had their care delayed due to the pandemic. Cyr was supposed to have a biopsy in spring of 2020 to check if the nodule on her throat was thyroid cancer.

That’s when the first wave of COVID-19 hit. The day the biopsy was supposed to happen, her appointment was cancelled and she was told that thyroid cancer wasn’t an urgent type of cancer.

“I was just baffled at the thought of being delayed,” Cyr told CTV’s Your Morning on Monday.

Cyr said she felt an incredible amount of stress while not being able to know whether or not she had cancer until she was able to reschedule her biopsy the following year. Doctors found a tumour and a month later, she was able to get the tumour removed.

“Thankfully, I had a lot of family and support around me. I did try to stay busy doing the things that I love and doing activities with my family,” she said. “However, I did go through every day, feeling my neck because I was able to touch the bump.

Edmonds says stories like Cyr’s highlight the need for governments to put resources into a plan to address the delays in cancer care and the backlogs in the health-care system.

“Clearly, at this time, the priority is always going to be sorting out the pandemic, and we understand that. But equally, we’re going to lose an estimated 85,000 people from cancer this year. So, we do need to maintain that cancer is a priority,” he said.