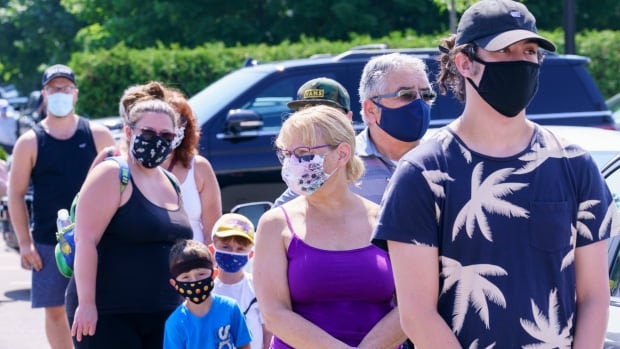 Health officials in the Montérégie are scrambling to contain an outbreak caused by large house parties they say have so far led to nearly 70 new COVID-19 cases.

The outbreak, linked to two parties in the Montérégie and a bar on Montreal’s South Shore, has caused some towns in the region to make wearing masks mandatory when in enclosed public spaces.

Dr. Julie Loslier, director of public health for the Montérégie, is urging residents to stop having large indoor gatherings, and for anyone who sees one to report it to police.

“It worries me. I see the impact of private parties,” Loslier said in a video posted to the public health authority’s Facebook page Thursday afternoon.

She said that when an asymptomatic carrier goes to a house party, everyone present is put at risk.

That was the case last month in Saint-Chrysostome, Que., a town about 50 kilometres south of Montreal where more than 100 young people attended a party.

She says that party is a major contributor to the outbreak in the region, and that it is difficult to track the spread of the disease as it is carried from party to party.

“When we talk about recent events where 100 people are gathered in a home, it’s not acceptable,” she said.

A number of businesses in the region have closed either out of caution or because an employee tested positive for the virus.

As of Friday, Saint-Chrysostome made it mandatory to wear masks inside businesses, and masks are also now mandatory in enclosed public spaces in Ormstown, also in the Montérégie.

Across Quebec, gatherings of more than 10 people in private homes are currently banned and those who do not comply can be fined.

While indoor public places such as shops and restaurants can have up to 50 people inside, the province announced new rules for bars on Thursday.

They must now close at 1 a.m., operate at less than half capacity and have clients remain seated.

The new rules come after several people who attended the Saint-Chrysostome party went to Mile Public House, a bar on Montreal’s South Shore, and infected other patrons.