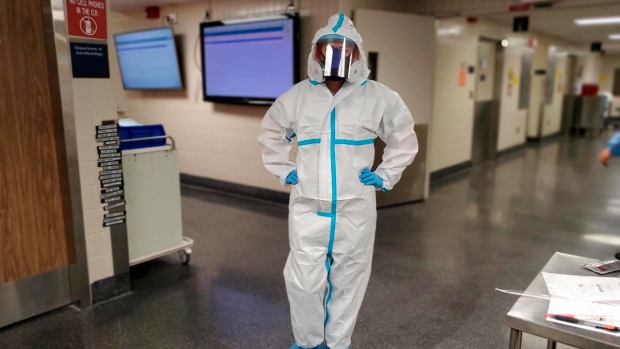 It starts with pulling on head-to-toe protective gear. Then comes a brisk walk down a hospital corridor, triple-gloved hands pushing a rattling anesthesia cart toward a door that leads to a frightened patient, gasping for air.

Hundreds of times every week during this pandemic, doctors and nurses treating critically ill COVID-19 patients steel themselves for a procedure that remains anything but routine.

These are the intubators, the airway experts inserting ventilator breathing tubes that place them mere inches away from where the contagious virus lives.

“You’re in COVID central when you’re intubating,” said Dr. Roy Soto, an anesthesiologist at Beaumont Hospital in Royal Oak, Michigan. “They’re frequently coughing and gasping. With a vivid imagination, you can almost visualize the COVID particles drifting throughout the room.”

In normal times, these experts work with patients who need help breathing during elective surgery, operations for gunshot wounds and other emergency cases.

What’s different now is not just that how critically ill and highly contagious these ventilator patients are — it’s also the grim, mounting numbers. In hot spots like New York City and Detroit, some hospitals report inserting breathing tubes for 20 or more COVID-19 patients in one day, hundreds in the past month — at least double the normal rate. Most don’t survive.

“Just an unprecedented wave of patients has been coming into the hospitals,” said Angella Jones, a nurse anesthetist at Detroit’s Sinai-Grace Hospital who is president of the Michigan Association of Nurse Anesthetists.

“You are very fearful of contracting the virus just because of the closeness of you to the patient’s airway and the virus,” she said.

Just how many airway experts have become infected on the job is unknown since detecting the source of coronavirus infections is difficult, but many have gotten sick. At Mount Sinai Health System in New York City, where hundreds of COVID-19 patients have been treated, about 20% of the anesthesiology team has been diagnosed with the illness, said Dr. Andrew Leibowitz, chairman of anesthesiology.

Fear of infection isn’t the only big concern for airway experts: The fate of their patients also weighs heavily.

Some hospitals in China and Italy have reported survival rates of around 20% for COVID-19 patients on ventilators. Rates reported by some U.S. hospitals are only slightly better.

But when patients can’t breathe on their own, whatever their chance of survival is, a ventilator might be their final option. “It really doesn’t matter if they have a 90% chance of success or a 10% chance of success,” Leibowitz said. “For that patient, it’s all or none.”

“They are alone, most of them are afraid, they don’t know what’s going on and if they’ll wake up with a breathing tube in or not wake up at all,” said nurse anesthetist Samantha Kuzmanovski of Sinai-Grace Hospital.

“We’re very much aware of the fact that this a potentially terminal event. This is potentially the last time that these people are going to be awake and breathing on their own. It’s pretty heavy,” he said.

“For a while, I kept track of who I had intubated to see how they were doing and after a while I stopped,” Soto said. “It was a little depressing.”

In the U.S., the American Medical Association is encouraging hospitals to provide mental health resources for doctors and other caregivers treating coronavirus patients. The University of California, San Francisco’s anesthesia department offers weekly video support sessions, giving airway experts a chance to discuss their worries and how they’re coping, and several other U.S. hospitals are offering similar outlets.

`’It kind of normalizes those emotions and makes you feel like it’s OK to kind of feel the fear, the anxiety, the guilt that you feel,” said Dr. Jina Sinskey, an assistant anesthesiology professor at UCSF.

Jones acknowledges that the job “is very stressful at times.” She said she prays at her patients’ bedside, and then again when she gets home. For them. And for herself, to remain disease-free and able to return to work the next day and start all over again.

Federica Narancio contributed to this story from Washington.