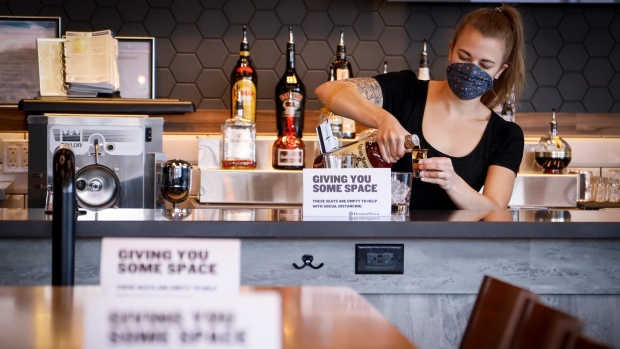 TORONTO — The number of people that currently have COVID-19 in Alberta is now roughly double that of Ontario on a per capita basis, following a spike in new cases after the province began reopening its economy in June.

The recent rise in infections in some provinces have highlighted concerns over the consequences of reopening too soon, but the notable increase in Alberta is also sparking worries the Western province could become the new hot spot for Canada.

Alberta reported 120 new cases on Thursday, its first triple-digit increase in two-and-a-half months. It comes as the province continues to ease restrictions and as much of Ontario prepares to loosen its own lock-down measures on Friday.

Most worrying for Alberta’s chief medical officer of health, Dr. Deena Hinshaw, and other health experts, is that the source of the new cases is unclear.

“What concerns me the most is what Dr. Hinshaw had just stated — that they don’t know where a lot of these cases are coming from and that’s a big red flag,” Dr. Matthew Oughton, an infectious disease specialist with McGill University Health Centre, told CTV News Channel.

Based on Statistics Canada’s population estimates for the second quarter of 2020 and the total number of active cases in each province as of June 16, there are 18.2 cases of COVID-19 per 100,000 residents in Alberta. That compares with the 9.3 cases per 100,000 still active in Ontario.

Alberta’s figure is also on par with Quebec after the latter province released a drastically revised tally of its recoveries on Friday that nearly doubled the previous day’s total. Before it implemented a new system for how recoveries were recorded, the province’s reporting on the measure sharply lagged the rest of the country.

The remaining provinces and territories have zero or an active case count of fewer than 1 per 100,000 residents.

With Ontario announcing that nearly all businesses — including indoor dining, gyms, movie theatres, casinos — can reopen throughout most of the province’s 34 public health unit regions, there is some concern that reopening too soon could reverse the progress the province has made so far against the pandemic.

Ontario, which recorded the second highest number of total cases in Canada at more than 37,000, has managed to steadily decrease the number of new cases reported each day. It has had fewer than 150 new infections a day for nearly two weeks — a significant drop from the 640 cases it reported in a single day in late April. But with most of the new numbers still coming from the Toronto, Niagara and Windsor areas, those regions are excluded from moving forward to Stage 3.

The province said it would closely monitor infection trends to determine whether restrictions need to be tightened, or can be loosened further.

“It’s very much like stamping out a small fire in the forest before it really flares up and starts burning down a bigger chunk of forest,” said Oughton. He said the most important thing is to maintain rapid and accurate testing, fast contact tracing, and ensure people are quarantined as quickly as possible to prevent a small problem from escalating.

Quebec, which had more than 57,000 cases in total, began reopening slowly in May, when it allowed businesses outside Montreal to reopen. Gyms, movie theatres and other places could reopen as of June 22. The province, which managed to bring the number of new infections below 50 at that time, has seen an uptick in new cases since then. The overall trend line has been relatively steady, however, with the province managing to keep new daily infections at fewer than 150 since mid-June.

In Alberta, there is worry that crowded parks and other public spaces, combined with a lack of social distancing, have contributed to the surge in new cases and what could become a “second wave.”

The province began allowing gyms, movie theatres, restaurants and numerous other businesses to reopen starting June 12. Current gathering guidelines allow up to 50 people in doors and 100 outside, but no cap for those attending church services as long as physical distancing was maintained.

After hitting single-digit lows at the beginning of June, Alberta still managed to keep new cases to under 50 for much of the month, but about two weeks after its mid-June reopening, numbers began climbing overall.

Saskatchewan, too, has seen some recent spikes, recording its highest number of new cases since the start of the pandemic on July 16, with 42 new cases. The province began allowing stores, restaurants, salons and gyms to reopen with some restrictions in early June. It moved into part of the province’s Phase 4 on June 22, which allowed youth and child day camps and gatherings of up to 30 people. The second half of the phase was enacted on July 6, which allowed spaces like museums, galleries, movie theatres, and casinos to resume operations.

Still, Oughton cautioned that a spike may not necessarily mean that a region reopened too quickly.

British Columbia, for example, has not had more than 50 cases in two-and-a-half months, and has been holding steady at under 30 new cases a day for nearly a month. It began reopening in mid-May, allowing retail stores, restaurants, museums to open and currently allow gatherings of less than 50 people. Meanwhile, other provinces that began reopening have managed to keep infection numbers in the single digits.

“It’s an easy assumption to jump to,” Oughton said, on correlating reopening with rising cases, adding that restrictions come with their own costs as well and that striking the right balance is a challenging task for public health officers.

With files from Brooklyn Neustaeter