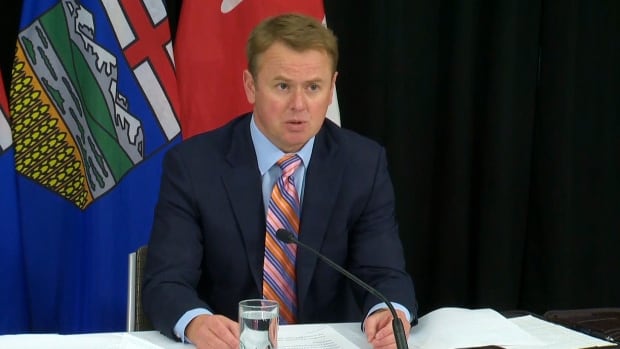 Alberta Health Minister Tyler Shandro has softened an aggressive plan to lay off front-line staff, including nurses, and extended the timeframe for a massive overhaul of the province’s health-care system citing the ongoing COVID-19 pandemic.

Between 9,700 and 11,000 AHS employees will be laid off, most of whom work in laboratory, linen, cleaning, and in-patient food services.

Those jobs will be outsourced to private companies.

Shandro said he decided to slow the aggressive implementation of recommendations contained in the Ernst & Young cost-cutting review of AHS.

“While we’re still committed to the goals of the review, our global landscape has changed significantly, namely by responding to the pandemic,” he said.

“And I have directed AHS that nothing must compromise this response.

“This is why we’re only prepared to proceed with a portion of the actions identified in the AHS implementation plan.”

Shandro said there will be no lay-offs of front-line staff such as nurses during the pandemic.

But he said AHS will eliminate some of those positions through attrition and, when pressed on whether there will be layoffs of front-line staff after the pandemic, he said, “I think any involuntary reductions will be minimal.”

The minister said the cuts are eventually expected to save up to $600 million annually and there will be a “long-term and gradual” implementation of the plan.

CBC News previously obtained a draft copy of the AHS implementation plan, dated July 29, that contained more aggressive cost-cutting measures that the health authority estimated would save between $837 million and nearly $1.2 billion annually.

The proposed plan included the elimination of up to 10,300 full-time equivalent positions — including hundreds of nursing and clinical support positions — estimated to impact as many as 16,700 full- and part-time employees through layoffs and job displacement.

But many of the proposed changes from the draft plan, including those that would download costs to the public and particularly seniors, are continuing. For example, AHS will:

He said Shandro’s bellicose public behaviour toward doctors and unions will make it nearly impossible to successfully implement the changes, which require collaboration with staff.

“The irony is that the government is right about many of the problems in the system; it just has no clue about change management,” Lewis told CBC News.

In a later interview, Lewis said “historically, it has been very difficult to bludgeon any major group in the system into large-scale change. So if you think you’re in a position to win battles that no one has won before, good luck to you.”

Health policy expert Dr. Michael Rachlis told CBC News that if Shandro had implemented the majority of the plan within the original three-year time frame it would have caused “chaos” in the province’s health-care system.