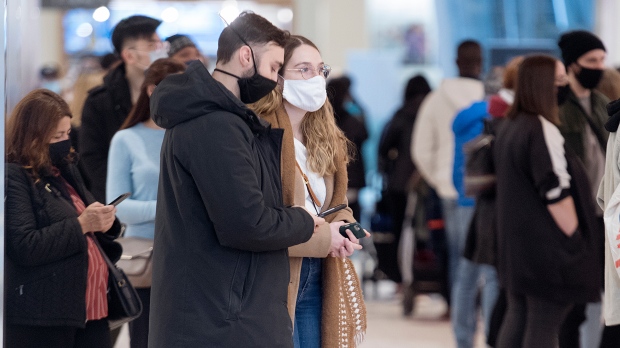 TORONTO — After British Columbia, Saskatchewan and Prince Edward Island mandated the use of face masks in public areas this week, Alberta was left as the sole province not to require them.

Many other provinces have been requiring mask use for months.

According to the province’s website, Albertans are “encouraged” to wear a mask in a public place or if they are at risk, though masks are not mandatory. They are required in schools for students in Grade 4 to 12 and all school staff.

The province says a mask should be worn: “When you’re in public and might come within two metres of others for a prolonged period of time: public transit, retail stores, hair salons”; or “when you’re in shared indoor spaces with people from outside your immediate household.”

But in the province’s most populated cities, masks are required.

Calgary and Edmonton have both required masks be worn in indoor public places and public vehicles since Aug. 1.

Banff went even further, requiring masks indoors and when in its outdoor downtown pedestrian zone.

A number of other Alberta communities have also imposed their own mask rules.

On Thursday, the governments for British Columbia and Saskatchewan mandated the use of face masks as part of sweeping new restrictions meant to slow down a second surge of COVID-19. P.E.I. made the move Tuesday.

B.C. is making masks mandatory in indoor public spaces stores, with customers and employees being required to cover their faces. Those under two and those unable to wear a mask for medical or disability reasons are exempted.

Until now, B.C. has resisted calls for a mandatory mask order, instead making it the responsibility of businesses, transit operators and community service agencies to implement their own rules.

“The mask mandate is not something that in and of itself has made a difference in terms of transmission,” the province’s health officer Dr. Bonnie Henry said as late as Wednesday.

On Thursday, she said the change in policy was due to increasing public pressure, including from businesses, expressing concerns about putting the onus of enforcing piecemeal policy onto workers.

The mask mandate isn’t being implemented by public health order, but by B.C. Public Safety Minister Mike Farnworth under the extraordinary powers granted by the province’s record-breaking state of emergency. It’s not clear when it will take effect.

The Saskatchewan government imposed a mask rule Thursday for all indoor spaces that took effect immediately and will stay in effect until Dec. 17. It also recommends wearing masks whenever you are outside your home.

“While many Islanders are wearing masks faithfully, we can collectively do a better job of protecting ourselves and others. Much like our neighbours in Nova Scotia and New Brunswick, we are relying on Islanders to do the right thing and routinely wear a mask when in public places,” said chief public health officer Dr. Heather Morrison.

Rules about exemptions and the details of what constitutes a public indoor space vary slightly across the country. But every province stresses that masks don’t replace the need for physical distancing, diligent hand-washing and staying home when sick.

Winnipeg has required masks in public spaces since Sept. 28. Manitoba moved to critical level on Nov. 12 and new restrictive measures take effect Friday. That requires masks whenever in an indoor public space for anyone over the age of five who is able to wear a mask.

As of Oct. 3, Ontario has required masks in all public spaces and in workplaces, even those not open to the public, except where a two-metre distance can be maintained.

Quebec has made masks mandatory in all public spaces for people 10 and over since July 18. That extends to demonstrations, too. The province also specifies that face shields cannot be worn instead.

In the province’s red zones, masks are required on the school grounds of secondary schools.

Masks have been required in Newfoundland and Labrador since Aug. 24 for those five and older, with exceptions., while Nova Scotia has had its mask rule in place since July 31.

The government of New Brunswick, which enacted a mandatory mask rule Oct. 8, reminds residents that an inability to wear a mask isn’t always visible.

“New Brunswickers should always treat each other with kindness, respect and understanding.”

The province made the rule after doing a survey of 600 public spaces that found, on average, only 36 per cent of residents were wearing masks and that it was as low as 16 per cent in urban areas.

As for Canada’s territories, Yukon recommends masks but only requires them in its airports. It reminds residents to comply with the rules of individual businesses.

“If you’re healthy or sick, wearing a non-medical mask is another thing you can do to help protect others around you,” reads the territory’s website.

As of Oct. 13, travellers inside airports in Northwest Territories must wear masks, but there is no mask rule beyond that.

In Nunavut, the Kivalliq communities have gone into lockdown and masks are mandatory for everyone while outside their homes.

There is no federal mask mandate. The Public Health Agency of Canada recommends wearing a non-medical mask or face covering in public places like retail shopping areas, especially crowded ones where physical distancing isn’t always possible.

“As the cases of COVID-19 in Canada are rising again across the country, we ask that you consider making a federal masking mandate,” the group wrote in a public letter dated Oct. 8. “This will send a strong message that we are in this together and we can once again get this under control if we work together as a country, not as a patchwork of bylaws done at the municipal or provincial level.”

It also urged the Alberta government to impose a “more diligent response” to COVID-19.