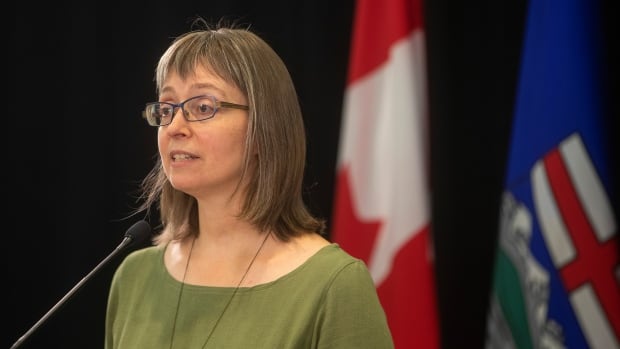 Alberta’s chief medical health officer now says the province’s controversial lifting of all COVID-19 public health restrictions in early July set the trajectory for the explosive fourth wave that has pushed its health-care system to the breaking point.

Dr. Deena Hinshaw also said in a Zoom meeting with Primary Care Network physicians on Monday that she “deeply” regrets her part in contributing to a narrative that “COVID’s over.”

A video of the meeting was posted on YouYube before it was set as private Tuesday morning.

In May, Alberta Premier Jason Kenney promised the “best summer ever” for Albertans as he announced the government’s three-part plan to be the first and most open province in Canada by July 1.

All restrictions were lifted, including a ban on indoor social gatherings and the general indoor provincial mask mandate, though the province retained isolation requirements for confirmed cases of COVID-19 and some protective measures in continuing care settings.

That set the course for Alberta’s massive fourth wave, Hinshaw acknowledged in the meeting Monday.

“I think that trajectory was set when we removed all the public health restrictions at the beginning of July,” Hinshaw said.

“If you look at the experiences of all of the different provinces across the country, those that have kept in some base level restrictions to manage the interactions and close contacts are the ones that are not seeing the significant impact.

“And those of us that removed them are the ones that saw the significant very steep rise in some of these acute care impacts.”

CBC News has contacted the premier’s office for a response to Hinshaw’s comments.

‘We have a crisis,’ Hinshaw says

During the meeting, Hinshaw said Alberta Health Services (AHS) catches about one in four new COVID-19 cases through PCR testing to date.

Reported cases of COVID-19 in Alberta skyrocketed in August and September, with the province now leading the country in daily new cases and total active cases.

As of Monday, there were 18,395 active cases across Alberta, the highest nationwide. By comparison, Ontario, a province with more than three times the population, has one-third the number of active cases.

It has put the greatest strain on Alberta’s health-care system to date in the pandemic, with about 800 people being treated in hospital as of Monday — 200 of them in intensive care units.

Modelling by AHS obtained by CBC News suggests that, by early October, there could be as many as 365 patients in need of the province’s current 286 ICU beds.

Many doctors have warned the health-care system is already buckling under the weight of ICU demands.

The fourth wave has also led to reduced levels of care and cancelled surgeries for non-COVID patients.

“We have a crisis, that’s clear,” Hinshaw said Monday night. “I think everyone’s well aware of that.”

Hinshaw also said the messaging that emerged from the decision to lift restrictions has made it difficult to reintroduce public health measures.

“I feel very responsible for the narrative that has made it more complicated to try to put additional public health measures in place, because whether or not it was my intention, what was heard at the end of July was, ‘COVID’s over. We can walk away and ignore it,'” Hinshaw said.

“That has had repercussions … and I deeply regret how that has played out.”

In some instances, that narrative was reinforced by the provincial government.

On June 2, for example, Matt Wolf, the executive director of issues management for the premier, tweeted, “The pandemic is ending. Accept it.”

On June 18, Kenney suggested health experts and journalists warning of a fourth wave were “spreading fear.”

“Regrettably, a few people likely will pass away, as has been the case forever with influenza, but we don’t shut down society to deal with that kind of limited and controllable risk. We manage the risk. The vaccines give us a superpower to manage it. Let’s embrace that.”

Kenney has also repeatedly rejected calls for vaccination requirements, which are increasingly common in other provinces when it comes to accessing bars, restaurants, gyms and other public venues.

But Hinshaw said Monday that it’s “pretty clear” vaccine passports have an impact.

In B.C., she said, there was a clear increase in vaccine uptake among younger age groups within two weeks of its vaccine card announcement.

People aged 30 to 39 saw an increase of almost three per cent, while uptake among those aged 18 to 29 went up by over four per cent, Hinshaw said.

“I think it’s pretty clear that requirements, especially for discretionary activities can have an impact in those age groups where we most need right now to increase our uptake,” she said.

She said she believes in a strong body of evidence that suggests regular mask use is an important factor in COVID control, and implied the decision to end their use in schools was not hers.

“Unfortunately masks have become one of those lightning rod issues that … people are very divided on,” she said.