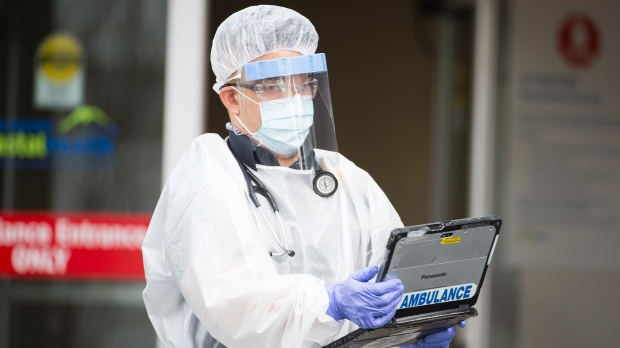 OTTAWA — Paramedics across the country who were already working at capacity say they’re being stretched by calls for help with COVID-19 and the extra precautions that come with them.

Dave Deines, president of the Paramedic Association of Canada, says major paramedic services routinely find themselves with more calls than ambulances to handle them. He says an increase in calls in areas hit hard by COVID-19 is putting an added strain on those services, and he expects it will get worse in coming weeks.

“The real strain is the extra demand on the system,” Deines said.

“Most services are set up to handle a big event in a specific area. Nobody really prepares or can prepare for a country-wide prolonged emergency.”

He has heard anecdotal reports of people calling 911 for ambulances when they have mild COVID-19 symptoms, further taxing services across the country.

Calls are also taking longer because paramedics need to be careful not to expose themselves to the virus and risk spreading it across the community.

“Every call that a paramedic goes to has the possibility of being a coronavirus patient,” he said.

They must also do longer assessments of patients, and put extra time into disinfecting their vehicles between calls.

Several paramedic services are trying innovative ways to avoid the strain. Renfrew County’s paramedic service, which operates in a large rural area west of Ottawa, has been heralded as the champion of those efforts. Mike Nolan, the chief paramedic for Renfrew County, says the service has seen a lull in calls at the moment, likely because people don’t want to go to the hospital. He calls it “the calm before the storm.”

His service has made a major shift to keep people in their homes when the pandemic does hit his community. He’s ramped up the county’s community paramedic program so that people can be assessed and tested for the virus in their homes, rather than congregating in assessment centres and spreading the virus.

The community paramedics are also planning to provide virtual care assessments, which will complement efforts to make primary care virtual in the region as well.

All of that together will hopefully make a difference when it comes to reserving ambulances for true emergencies, limiting the spread of the virus and preserving the limited supply of personal protective equipment, he said.

Several other paramedic services across the country are starting to introduce or ramp up similar services in their jurisdictions as well.

If call volumes stay small in his county, Nolan said he’d like to offer help to other paramedic services who won’t be so lucky. He’s already in talks to support Indigenous communities in remote regions with limited access to paramedicine.

But there are serious regulatory hurdles that will be need to addressed, he said.

While provinces have pandemic plans that would allow for front-line workers to move between them in an emergency, licensing bodies would need to get on board as well.

Deines said it’s something the provinces are already talking about, and it will be especially important if more paramedics start to fall ill.

“We need to do whatever we can to bring in outside help from places that don’t have that high volume,” he said.

This report by The Canadian Press was first published March 24, 2020.