MONTREAL — A labelling error has forced Taro Pharmaceuticals Inc. to recall some of its anti-itch creams, according to Health Canada.

The error “may pose serious health risks to children under two years of age” as it incorrectly reads that “application should be supervised by an adult” when it should instead state “consult a doctor.”

“There is no quality issue with the product, but the labelling error could lead to the inappropriate use of the product on children under two years of age,” Health Canada warns.

“The company is recalling the mislabelled products from retail stores. Consumers are not being asked to return products.”

Anyone who has this product at home is asked to consult a doctor if they have used it, as well as before using it, on a child under the age of two. 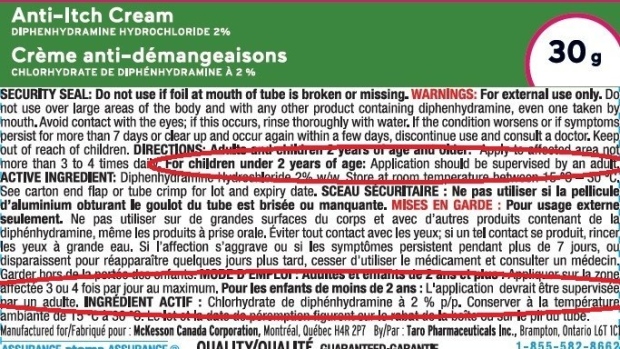 It is possible that the drug may be absorbed in significant amounts, especially if the skin is broken.

It is only recommended for children younger than two years old under the guidance of a health care professional as it can increase the risks of side effects like restlessness, irritability or agitation, trouble sleeping, or more serious side effects like muscle spasms, trouble breathing and seizures.

The products have been sold across Canada since July 29.