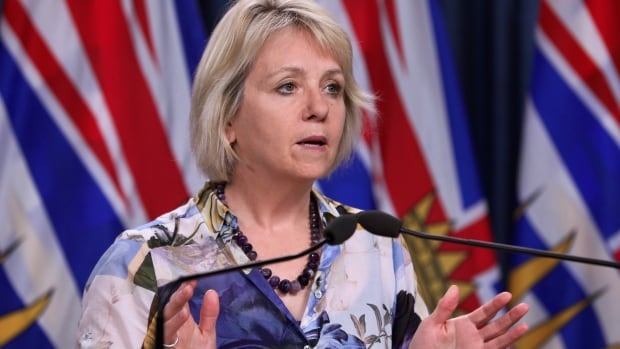 B.C.’s provincial health officer says the recent increase in the number of new COVID-19 cases being confirmed each day is an expected result of people opening up their social circles and spending more time outside the home.

On Tuesday, Dr. Bonnie Henry announced 13 new cases of the novel coronavirus, bringing B.C.’s total to 3,128 to date. That follows a weekend when 62 new cases were confirmed.

“We’ve had more than we’re used to seeing in the last few days. This is not unexpected,” Henry acknowledged in her daily briefing.

Still, she said she was distressed to see one day recently when there were 25 new cases of the virus.

She added that everyone needs to recommit to socializing with only a small number of people in larger spaces — preferably outside.

Tuesday’s update included no new deaths from COVID-19, leaving the total deaths to date at 189.

There are 209 people with active cases of the illness, of whom 14 are in hospital, including five in intensive care.

‘We have sacrificed a lot’

Henry said that when B.C. began implementing measures to prevent the spread of the virus back in March, she had some hope that health officials around the world would be able to stop COVID-19 in its tracks, but those hopes have been dashed.

Dr. Bonny Henry says seeing the number of new cases of COVID-19 go above 20 per day is ‘above her comfort zone,’ but understandable due to relaxing restrictions. 1:14

While the virus continues to circulate in the community, B.C. will continue to see new cases, Henry said, but it’s up to each individual to make efforts to keep infections at manageable levels to protect the vulnerable and so that public health workers can trace the contacts of each person who falls ill.

“We were able to flatten the curve, but what that means is we’ve been grumbling along at 10, 15, 20 [new cases a day] in the last little while. As we start doing more, and having more contacts, that’s our reality now,” she said.

“That’s going to be our reality, in my opinion, for the next months until we have an effective treatment or vaccine.”

Henry said “we have sacrificed a lot in British Columbia” over the last few months of the pandemic, and it’s important not to undo all that hard work.

In response to questions about multiple recent potential exposure events over 12 days in bars and restaurants in Kelowna’s downtown and waterfront areas, Henry said she’s spoken to people who work in the restaurant industry across B.C. about their concerns.

She’s particularly concerned about stories that suggest large groups of people are visiting restaurants together, taking up multiple tables and then hopping between them, rather than sticking to groups of six or fewer. Henry said table-hopping puts staff at risk, and is not acceptable.

Henry also addressed an outbreak at Krazy Cherry Fruit Co. in the Okanagan, where at least two people have tested positive for COVID-19. She said food is not a source of transmission for the virus, but it’s always wise to wash fruit thoroughly before eating.

There are no new outbreaks in the health-care system, leaving two active outbreaks in long-term care and one in an acute care unit of a hospital. To date, 399 residents and 252 staff at these facilities have tested positive.

Earlier Tuesday, the provincial government announced it is forecasting a $12.5 billion deficit due to the pandemic.

Finance Minister Carole James said it could be “the worst downturn experienced in our province in recent history.”

Yet support for Premier Horgan remains high, according to an Insights West poll. Horgan’s approval rating now sits at 68 per cent, which is 17 points higher than seven months ago.

Also on Tuesday, CBC News learned the agreement to restrict travel across the Canada-U.S. border will be extended into August. The agreement, which has to be reviewed each month, was set to expire on July 21.

Henry said Tuesday that she doesn’t expect it to be safe to have visitors from outside the country any time soon, especially as the U.S. continues to experience record-breaking numbers of new infections.

But Health Minister Adrian Dix offered a reminder that the pandemic is a problem everywhere, not just south of the border.

“We can absolutely in no way be smug about this question,” he said.