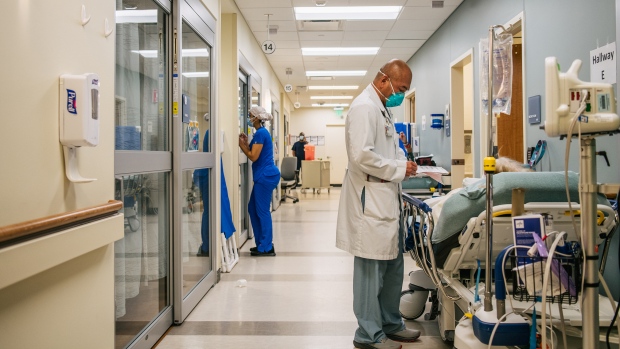 With an alarming rise in COVID-19 cases and hospitalizations, more Americans have recently made the decision to get vaccinated than in the last six weeks.

More than 1 million doses of the vaccine were reported administered Thursday, new U.S. Centers for Disease Control and Prevention data showed, marking the first time since early July for the single-day change in reported doses. The average pace of those initiating vaccination is more than 70% higher than one month ago.

Oklahoma and Louisiana — two states that have lagged the rest of the nation in vaccinations — are now outpacing the national average, White House COVID-19 Response Team Chief of Staff Asma Mirza said in calls with local faith leaders Thursday.

“We’re seeing a new willingness, a new openness to getting vaccinated,” she said in a discussion with Louisiana faith leaders.

The boost in vaccinations, however, comes as more health care systems are reporting an increasingly dire situation, with an influx of patients flooding waiting rooms due largely to the spread of the more infectious Delta variant.

And because it takes weeks to gain immunity following full vaccination, even those beginning their inoculations need to remain cautious against infection.

Dr. Robert Jansen, chief medical officer at one of Atlanta’s largest trauma centres, Grady Health System, said it was seeing a “tsunami of patients coming into the emergency department.”

The situation is also critical in Texas, where Gov. Greg Abbott announced the state will deploy additional medical personnel to hospitals across the state.

Lauren Meyers, director of the University of Texas COVID-19 Modeling Consortium, warned that area hospitals are at a “breaking point.”

“We are sort of in a very dire situation in Austin,” Meyers said.

The rate of hospitalizations is still below pandemic highs seen in January, CDC data shows. But at the current pace — an average of more than 11,000 new hospital admissions for COVID-19 over the past week — the US might reach a record high within a month, the CDC said.

Mary Mayhew, the president and CEO of the Florida Hospital Association (FHA), told CNN Friday the state’s current surge is “fundamentally different” from earlier surges, with more than 17,000 COVID-19 patients hospitalized in about six weeks amid a “severe staffing shortage.”

“These are healthy, young 20-year-olds, 30-year-olds who, because of the aggressive nature of the Delta variant, are now being hospitalized,” Mayhew said.

Hospitals across the state are doing everything possible to respond to the demand by postponing elective services and bringing in staff from other states, Mayhew said. They’re even converting auditoriums and cafeterias “to meet patient demand.”

Preventative vaccinations are the most effective means to combat COVID-19 infections, and the U.S. Food and Drug Administration will likely approve the Pfizer/BioNTech vaccine around the end of August, former FDA Commissioner Dr. Mark McClellan said Thursday. Current vaccines have been granted emergency use authorization.

“I think that approval, at least for the Pfizer vaccine, is going to come very soon — probably by the end of the month or right around there,” McClellan told CNN’s Chris Cuomo.

Booster shots for those inoculated are expected to be made widely available by September 20, and about 75% of the eligible population will have received at least one dose of Covid-19 vaccine at current vaccination rates, according to a CNN analysis of CDC data.

Around 51.1% of the total U.S. population is fully vaccinated, according to the CDC.

With the efficacy of vaccines continuously proven in keeping recipients out of hospitals, more jurisdictions nationwide are taking steps requiring employees to be inoculated, barring medical or religious exemptions.

Massachusetts Gov. Charlie Baker issued an executive order Thursday that will require approximately 42,000 executive department employees to provide proof of vaccination by mid-October or face possible termination, according to a spokesperson.

In New Orleans, all city employees and public-facing personnel will need to submit proof of vaccination or receive routine COVID-19 testing starting August 30, according to Mayor LaToya Cantrell.

The mayor’s office said the additional step was taken “to protect residents, City employees and public-facing contracted personnel from the COVID-19 outbreak, and more recently the Delta variant outbreak in Orleans Parish.”

In Oregon, all K-12 teachers, educators, staff and volunteers at schools — both public and private — will need to be fully vaccinated for COVID-19 by October 18 or six weeks after full FDA approval, Gov. Kate Brown announced at a press conference Thursday.

The Houston Independent School District’s Board of Education is taking a different approach by offering a US$500 stipend for employees who are fully vaccinated by November 19. The board passed the measure on Thursday, though it still needs to be approved by the Texas Education Agency, the district said in a statement.

“The best tool we have in this fight against the COVID-19 pandemic is vaccination,” Superintendent Millard House II said in the release. “As vaccinations increase in our communities and schools, the better protected and safe we all will be.”

Dr. Anthony Fauci, director of the National Institute of Allergy and Infectious Diseases, told CNN’s Jake Tapper Thursday that vaccine requirements at schools is a sound strategy to create a safe environment.

“One of the most important ways is to surround the children with people who are vaccinated, if they’re eligible to be vaccinated — and that means teachers and personnel in the school,” Fauci said.

‘THIS IS NOT AN ADULT DISEASE ANYMORE’

With schools back in session, local officials are faced with deciding whether to mandate masks in classrooms, plus the day-to-day challenges of quarantining students exposed to COVID-19.

Dr. Sara Cross, a member of the COVID-19 task force for Tennessee’s governor and an infectious disease specialist at the University of Tennessee, said bans on mask mandates would have “catastrophic consequences” for those in classrooms.

“When one child doesn’t wear a mask, it doesn’t only affect that child. It affects the entire classroom. It affects teachers. We just had a teacher in the Memphis area, a 31-year-old woman, die of COVID in the past few days from acquiring it in the classroom,” Cross told CNN’s Ana Cabrera on Thursday.

“We can’t handle what we’re seeing. We are estimating that the number of cases in Tennessee will increase six-fold by the end of September if we don’t take measures to mitigate the spread,” Cross said.

“This is not an adult disease anymore,” Cross said, saying the pediatric hospital in downtown Memphis “currently has at least 9 children in the ICU from COVID-19.”