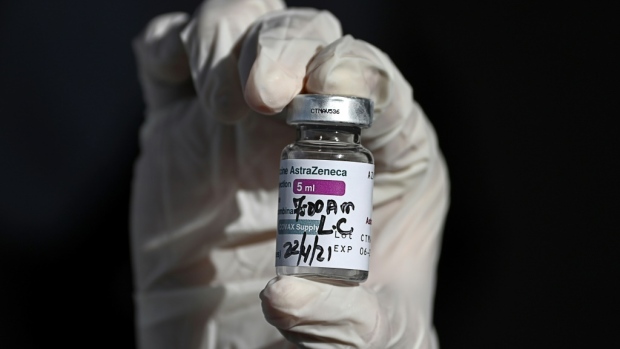 THE HAGUE, NETHERLANDS — The benefits of AstraZeneca’s COVID-19 vaccine increase with age and still outweigh the risks for adults despite links to very rare blood clots, the EU’s drug regulator said Friday.

Health authorities should also continue to give a second dose of the vaccine, dogged by controversy over the rare but occasionally fatal clots, the European Medicines Agency (EMA) said.

The Amsterdam-based EMA was presenting the findings of a review ordered by the European Commission after concerns that prompted several countries to restrict the AstraZeneca jab’s use to older people.

“The data showed that the benefits of vaccination increase with age, and with increasing levels of infection in the community,” EMA Deputy Executive Director Noel Wathion told a virtual news conference.

“The benefits of Vaxeveria outweigh its risks in adults of all age groups, as already confirmed by the agency. However very rare cases of blood clots with low blood platelets have occurred following vaccination.”

The new AstraZeneca findings should be a “useful guide for member states when adjusting their vaccination strategies” depending on age, Wathion added.

Overall, the rare clots happened in around one in 100,000 people who received the vaccine, the agency said.

“The work clearly shows that the favourable effects of vaccination compared to the very rare blood clots get bigger with increasing age, and with increasing infection rates,” Peter Arlett, head of data analytics at the EMA, told the news conference.

Brussels asked the EMA to carry out further investigations on links to age, and the safety of a second dose, after the agency said on April 7 that the clots should be listed as a very rare side effect.

Clots are also being listed as a side effect of the J&J vaccine, which uses the same adenovirus vector technology as AstraZeneca, the EMA said earlier this week.

The second dose of AstraZeneca should continue to be given between four and 12 weeks after the first, in line with current instructions, despite some countries moving to replace the second with mRNA vaccines like Pfizer or Moderna, the EMA’s Wathion said.

“The data did not support delaying or avoiding a second dose of the vaccine,” he said.

Despite reports that clot cases were more prevalent among women, the EMA said in a statement that “there were insufficient data available from across the EU to provide further context on benefits and risks with regard to sex”.

The regulator said on Tuesday that there had been 287 cases of the rare clots worldwide linked to AstraZeneca, 25 to the Pfizer-BioNTech vaccine, eight to the Johnson & Johnson shot and five to the Moderna jab.

The EU is now increasingly relying for its rollout on the BioNTech/Pfizer vaccine.

The European Commission is also looking to launch legal action against AstraZeneca for underdelivering COVID-19 vaccine doses to the EU, which hobbled its early rollout.