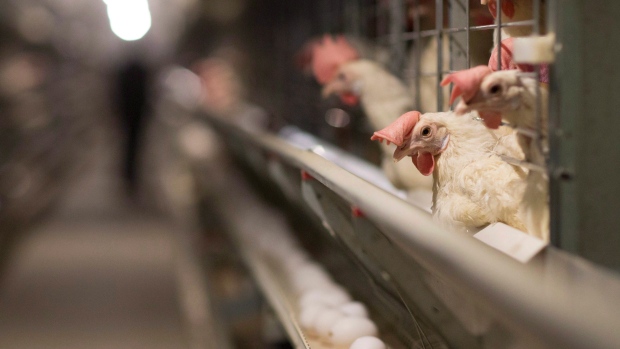 TORONTO — A highly contagious strain of bird flu is spreading in farms across North America and killing millions of poultry, but experts say the risk of human transmission remains low.

Since late last year, the Canadian Food Inspection Agency (CFIA) has identified outbreaks of the H5N1 strain of avian influenza in at least 20 commercial and backyard poultry flocks in Ontario, Alberta, Nova Scotia and Newfoundland and Labrador.

Several farms have been placed under quarantine. In southwestern Ontario, the CFIA established two avian control zones to curb the spread of the bird flu.

In the United States, the Centers for Disease Control and Prevention says poultry outbreaks have been reported in 24 states, killing nearly 23 million chickens and turkeys.

However, the origins of this recent wave of outbreaks remains unclear.

“That’s the multi-million-dollar question,” said Dr. Shayan Sharif, professor and associate dean at the Ontario Veterinary College, in a phone interview with CTVNews.ca on Thursday. “What we do know is that it started in eastern Canada.”

Avian influenza occurs naturally in many wild birds, which can then spread to poultry farms through bird droppings and nasal discharge. Experts say contaminated equipment, clothing, boots and vehicles carrying supplies can also spread the flu within poultry farms.

The first cases of bird flu were confirmed at a farm in Newfoundland’s Avalon Peninsula last December, after the sudden death of birds over a period of several days. A second outbreak was confirmed in in the Avalon Peninsula in January.

By February, the flu had spread to farms in Nova Scotia and the U.S. And between March 27 and April 6, the bird flu had been reported in 10 flocks in Ontario.

This time of year also happens to be one of the busiest seasons for migratory birds. Sharif believes the flu has the potential to spread to more provinces. While no outbreaks have been reported on farms in Quebec, three cases of avian flu have been detected in Canadian geese in the province.

“Migratory birds, they have very clear fly routes. But sometimes, they may also go stray and go in various other locations. So, as a result of that, I wouldn’t be surprised to see if other provinces are also being affected, but hopefully not,” he said.

While there haven’t been any outbreaks in zoos yet, organizations like the Toronto Zoo have been closing aviaries to the public and adding extra security to bird enclosures to keep wild birds out.

South Korea and the Philippines have imposed restrictions on poultry products from all of Canada, while the U.S. and Europe are restricting products from specific regions that have seen outbreaks.

But Sharif says it’s “highly unlikely” that any humans will contract the virus from food.

“Even if it could be in human food, the reality is that this virus is quite susceptible to heating. So, cooking your chicken or cooking your egg will completely obliterate the virus.

Ontario’s Ministry of Agriculture, Food and Rural Affairs has also said that the bird flu “is not a threat to food safety” and that poultry and eggs from the province “are safe to eat when proper handling and cooking takes place.”

So far, there have been no cases of the bird flu infecting humans either in Canada or the U.S. But Sharif says he’s still concerned about the potential for the avian influenza virus to infect humans, given that this virus has a high capacity to mutate.

“I would be watching this very carefully because this virus, like all influenza viruses, has a very wide range of host species,” he said. “If it does mutate, and if it does gain the capability of transmission to humans… then you could be dealing with another pandemic virus.”

With files from The Associated Press and The Canadian Press.