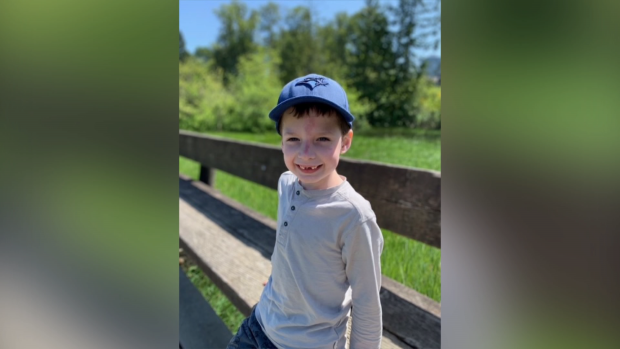 Parents in Chilliwack, B.C. are facing a tough decision after the Ministry of Health ruled their son ineligible to receive life-rescuing seizure medication at school.

Chris and Michelle Gaudet say their son Hampton was diagnosed with Sturge-Weber syndrome at 19-months old.

The incurable condition applies constant pressure to the right side of the brain, causing both seizures and developmental issues.

The Gaudets say Hampton, now 8 years old, has had over 20 seizures while at school this year.

“Anything that touches his right foot causes him to have a seizure,” Michelle told CTV news.

“In a school setting or with friends it can be difficult because it can be another kid, a chair, a ball, basically anything that comes in contact with his foot,” she added.

Since his diagnosis, Hampton’s parents say he’s taken Midazolam, a benzodiazepine considered a life-rescuing medication for those having intense seizures.

Every year, nurses from the provincially funded Nursing Support Services (NSS) have been training staff at schools with students prone to seizures how to administer the medication.

“The rescue medicine is there to protect in the worst case scenario when the seizure does not run its course and stop naturally,” Chris said.

That rescue medicine, however, won’t be provided at school much longer.

The Gaudets say they’ve been notified by the NSS that Hampton no longer meets the criteria.

The NSS told the Gaudets that a province-wide review completed in 2021 has resulted in the change that will come into effect at the beginning of next school year, in September 2022.

The Ministry of Health provided a written statement to CTV News Vancouver.

To be eligible for Seizure Rescue Intervention Care Plan, a child must have required a rescue intervention over and above basic seizure first aid to stop their seizures,” the statement reads.

“If it has been more than 12 months since a child has needed a seizure rescue intervention (medication), the child will be transitioned off an NSS Seizure Rescue Intervention Care Plan and into a Seizure Action Plan in the school setting.”

Despite a recommendation from his Neurologist, Hampton has not been given an exemption by the NSS.

“He averages about a minute and a half to a minute forty-five per seizure and he’s supposed to administer his rescue medication at two minutes, so were fifteen seconds short,” said Michelle.

“We can either send our child to school or risk severe injury or even death or we can keep our child home from school — and he’s not entitled to an education like all other children,”

The Gaudets say they’ve heard from other families who have received the same letter, they’re hoping more families will join the fight for their children’s safety, and their right to an education.