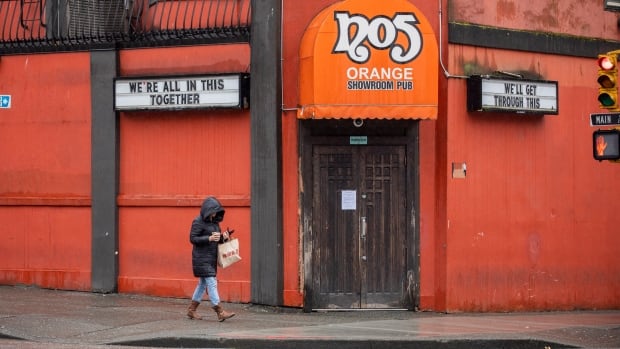 As the COVID-19 exposure advisory for the No5 Orange strip club was expanded on Wednesday, Health Minister Adrian Dix said B.C. health officials are looking into whether the rules for night clubs are being followed, and if they need changing.

Officials advise that anyone who visited the No5 Orange on July 3, 4, and 7 may have come into contact with the virus after an earlier warning said anyone who attended the strip club on July 1 was at risk.

Dix said the No5 Orange warning, along with one at another strip club in Vancouver, Brandi’s, and a downtown nightclub, Hotel Belmont, were issued because of the inability to contact everyone who visited the clubs.

Establishments are required to gather contact information for everyone who visits, in case there’s an exposure and officials need to follow-up.

“With respect to nightclubs as a class, they’re getting in under the food and liquor categories right now,” said Dix. “The presentations are being characterized as events.”

Dix said the events are limited to 50 people and the industry, in general, has been very concerned about following the rules and maintaining public confidence.

Vancouver Coastal Health (VHC) expanded the No5 Orange warning because a second person who had been at the club tested positive. Anyone who was at the business on the days in question is asked to self-monitor for COVID-19 symptoms for 14 days. If any develop, VCH asks that they immediately self-isolate and arrange to get tested.

Symptoms of COVID-19 may include fatigue, loss of appetite, fever, cough, runny nose, sore throat, diarrhea, and loss of smell.

The virus can be spread by droplets that become airborne when an infected person coughs, sneezes or exhales. And also when a person touches a surface contaminated with the virus and then touches their mouth, nose or eyes before washing their hands.