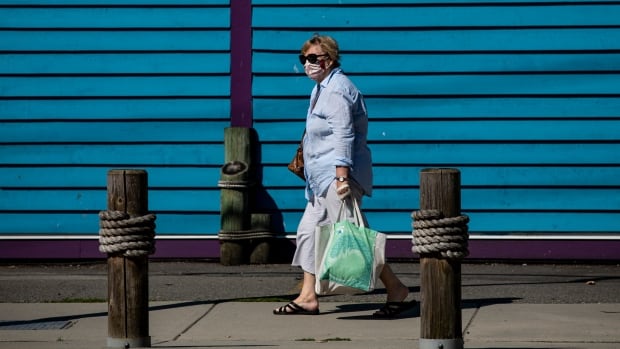 British Columbia’s surge in new COVID-19 cases is showing no sign of slowing, with another 236 cases confirmed since Friday afternoon.

There are now 743 active cases of the illness in the province, which is the highest total to date, and the addition of 100 new cases on Saturday marked the highest one-day tally so far.

Monday’s briefing was led by Deputy Provincial Health Officer Dr. Réka Gustafson, who said another two people have died from the novel coronavirus in B.C., bringing the province’s total to 198.

She said the majority of new cases continue to involve young people, who often have mild versions of the COVID-19 illness caused by the virus.

“This actually makes things quite challenging. That’s because some people might not realize they have COVID-19, and they can inadvertently spread it,” Gustafson said.

“You could easily spread the virus to someone who is vulnerable.”

A total of 4,594 people in B.C. have had confirmed infections with the virus since the start of the pandemic. Of those, four are in hospital, including three in intensive care, marking the lowest hospitalization count since a provincial state of emergency was declared.

WATCH | Dix says hospitalizations at record low while new cases climb in what he calls ‘a tale of two pandemics’:

Health Minister Adrian Dix says although hospitalizations are down, active cases are on the rise. 1:47

Monday’s update also included two new outbreaks in the health-care system, including the Czorny Alzheimer Centre in Surrey and the Arbutus Care Centre in Vancouver.

Health Minister Adrian Dix said he spent much of the weekend engaging with young people to encourage them to prevent the spread of the virus.

He added that surveillance efforts over the weekend have resulted in the closure of some nightclubs and other establishments that won’t be permitted to reopen without the permission of public health officials, including the Ivy Lounge in Vancouver’s Trump Tower.

Officials have also reviewed banquet halls to determine how well they are following public health rules.

Dix said he expects the pandemic to continue through 2021 and into 2022.

“This new normal is going to be in place for a long time.”

“We cannot let a few wreck it for everybody else,” Dix said.

He also addressed private parties inside people’s homes, saying that there are no excuses for bending the rules.

“We need to hold each other responsible for doing the right thing,” Dix said. “There is no immunity. To be successful, we have to work together every day.”

But he added that it’s difficult to address issues with gatherings inside homes because of privacy issues, so the main approach will be through stronger messaging.

Though outrage continues to pop up on social media over gatherings on beaches and in parks, Gustafson said B.C. has had very few cases linked to outdoor transmission of the virus, and the major concern for public health officials continues to be indoor gatherings.

Last week, Dix and Provincial Health Officer Dr. Bonnie Henry appeared sombre at their briefings as they revealed modelling showing the number of contacts people are having are about 70 per cent of normal, which could cause the daily number of new cases to climb to 100 by September.

Henry described the data as “concerning.”

Still, she said that the province’s contact-tracing efforts could temper that growth.

Last week, the province announced it had temporarily hired 500 more health-care professionals to work as contact tracers, who can help make sure that everyone who has been exposed to the coronavirus is in isolation and monitoring themselves for symptoms.

Both employees are now self-isolating at home and both facilities have increased cleaning and infection regimens.

The most recent update from provincial health officials on Friday said COVID-19 outbreaks were continuing at seven other long-term care or assisted-living facilities and one acute-care facility.

Going into the weekend, Dix urged residents to do all they could to bend the B.C. COVID-19 curve back down.

He also said that public health officers would be checking banquet halls and large parties on Saturday and Sunday to make sure health protocols to prevent the spread of the coronavirus were being followed.