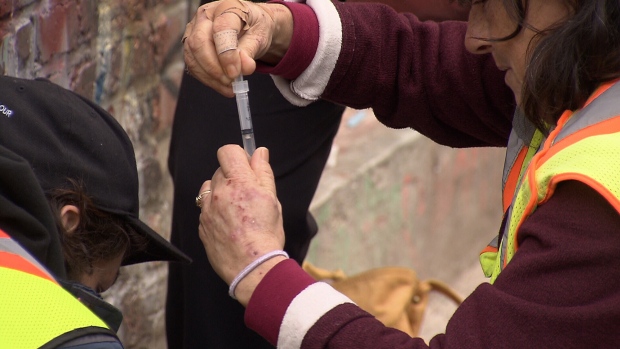 VICTORIA — More drug users died in British Columbia last month than ever before in the province’s history, eclipsing a record set just one month prior as health officials grapple with the twin crises of a global pandemic and an opioid epidemic.

There were 175 illicit drug toxicity deaths in B.C. in June, an average of 5.8 fatalities every day.

The latest numbers have pushed the province’s total to 728 lives lost to illegal drugs in the first six months of 2020. Most of the 175 deaths in June – 124 in total – involved fentanyl, according to the BC Coroners Service.

The previous monthly record set in May saw 171 drug users die of suspected overdoses and poisonings, a rate of 5.5 drug fatalities per day.

Most of the deaths have occurred in Vancouver, Surrey and Victoria.

“For the second month in a row, this province has experienced the highest number of deaths ever as a result of illicit substances with 175 lives lost, leaving behind grief and frustration while this public health emergency carries on into its fifth year,” said chief coroner Lisa Lapointe in a statement Thursday.

“We know the COVID-19 pandemic has impacted people who use drugs, as it has all British Columbians,” Lapointe added. “Access to key harm reduction services has been a challenge and our social networks are smaller.”

The chief coroner warned that the “drug supply in our province is highly toxic” as data from the coroners service published Thursday reveals an increasing number of drug users in April, May and June had “extreme fentanyl concentrations” in their blood during post-mortem tests.

The coroner’s warning comes one week after B.C. Premier John Horgan gave his support to a group of Canadian police chiefs who are calling for the complete decriminalization of illicit drugs for personal use.

The Canadian Association of Police Chiefs announced on July 9 that it was endorsing the decriminalization of drug possession and calling for a national task force on drug policy reforms.

The premier noted that British Columbia is limited in what it can do with regard to drug enforcement policy – a federal Criminal Code matter – but said he has “made it clear to the prime minister where British Columbia stands.”

“Today’s report clearly shows us that the tragedy of overdose deaths from the toxic street drug supply in B.C. continues to escalate,” Henry said. “While much effort has been made to reduce harm, remove stigma and provide the care that people living with addiction need, the impacts of the pandemic have made the situation dire for too many.”

Dr. Perry Kendall, an executive director with the BC Centre on Substance Use, says the recent spike in deaths among drug users is “entirely preventable.”

The coroners service says that no deaths have been reported at any of B.C.’s supervised consumption sites in 2020.

“The number of lives lost over more than four years of a public health emergency is heartbreaking,” Kendall said. “It is quite clear what needs to be done: invest in a public health approach to substance use that promotes the health and equity of people who use drugs. This must include not only decriminalization, but also pharmaceutical alternatives to the toxic drug supply.”