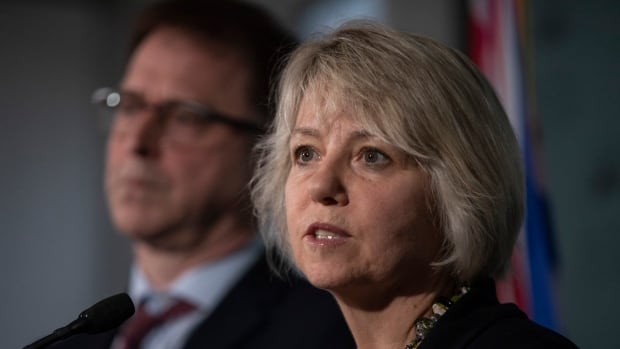 A seventh case of COVID-19 has been diagnosed in British Columbia in the Fraser Health region.

Provincial health officer Dr. Bonnie Henry said the man, in his 40s, is a close contact of a young woman who was diagnosed with the novel coronavirus last week after she travelled back to Vancouver from Iran.

Henry said the man had shown symptoms of the illness prior to the positive diagnosis of the woman, and went into isolation last week. He is now in stable condition and recovering at home, as is the woman.

Officials have been working to identify those who may have come into contact with the man, said Henry.

“There have been a number of close contacts that have been identified by Fraser Health over the weekend and they are also in isolation now and being monitored actively every day by public heath,” she said.

B.C. Health Minister Adrian Dix said the man’s diagnosis was confirmed by the B.C. Centre for Disease Control, which is now authorized for COVID-19 testing — that means samples no longer have to be sent to the National Microbiology Laboratory in Winnipeg.

According to Henry, the first person who was diagnosed with COVID-19 in B.C. four weeks ago has now recovered.

She said cases two, three and four — a household cluster in the Vancouver Coastal Health region — are also recovering, as is the the fifth case, located in the Interior Health region.

Henry said no additional cases related to close contacts of the first five cases have been identified.

Earlier Monday, a woman in her 20s who had arrived from China on Friday was confirmed as the fourth case of COVID-19 in Ontario.

The woman had traveled to Hubei province and the city of Wuhan, the epicentre of the outbreak, in January.