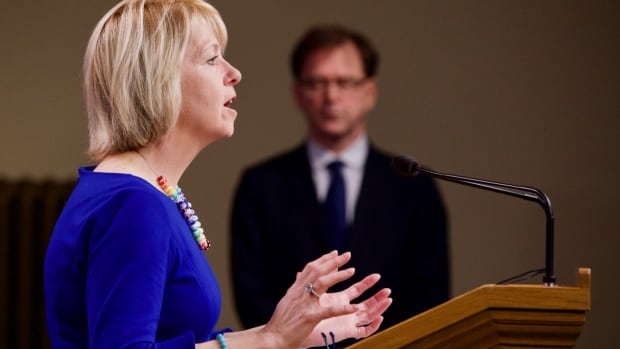 B.C.’s provincial health officer says anyone who has symptoms of COVID-19 can now be tested for the disease in an attempt to avoid a spike in disease transmission through the community.

The announcement came as Dr. Bonnie Henry said B.C. has confirmed 52 new cases over the last 48 hours, for a total of 1,699 to date.

Another five people have died since the last official update on Saturday, bringing deaths from the novel coronavirus to 86 to date. A total of 104 COVID-19 patients are in hospital, including 49 in intensive care, and 1,039 people have recovered from their illness.

The new cases confirmed Monday also include seven workers returning from the Kearl Lake oilsands project in northern Alberta. Henry has issued a new order stating that anyone who has returned from the oilsands site since March 15 must self-isolate for 14 days after their return.

Outbreaks are still active at 20 long-term care homes in B.C., where 307 people have been diagnosed with COVID-19, as well as Bylands Nurseries in West Kelowna. Seventy-five have now tested positive at Mission Institution, including 64 inmates of the federal prison.

Henry described B.C.’s new testing strategy as an evolution based on the changing pandemic situation in B.C. She said that while everyone can now be tested, not everyone should be. That means that the test has “limited applicability” for people who do not have symptoms of COVID-19, Henry said.

She also reiterated that while B.C. has had some success in bending the curve of infection, British Columbians should not expect any change in the restrictions on daily life until at least mid-May.

“Our new normal is going to be a modification of the things we have had in place for the past few months,” Henry said.

Any changes will be gradual, she stressed, and will still depend on maintaining appropriate physical distancing.

She also acknowledged the toll the restrictions have taken on people’s finances and personal lives, but said the relative success B.C. has had in keeping the pandemic under control should not be taken as a sign that the province has overreacted.

“We have averted a major crisis in B.C., but that’s because people have done what we’ve asked them to do,” Henry said.

Dix said B.C. is approaching the point when it will be necessary to use alternative equipment, but he said those alternatives will be safe and effective.

He also reiterated that B.C.’s hospitals are safe, and anyone who needs urgent medical attention should not hesitate to call 911 or visit the emergency room.

Earlier Monday, TransLink — Metro Vancouver’s transit authority — announced nearly 1,500 layoffs and widespread cuts in service as an effort to stop widespread financial losses across the system. The cuts come days after it said it was losing $75 million every month due to COVID-19, while announcing ridership has dropped by more than 80 per cent since mid-March.

Elsewhere, Vancouver police said officers would be monitoring to make sure there were no small gatherings in celebration of 420, which has typically seen thousands of cannabis enthusiasts gather and light up in celebration every April 20.

If you have a COVID-19-related story we should pursue that affects British Columbians, please email us at impact@cbc.ca