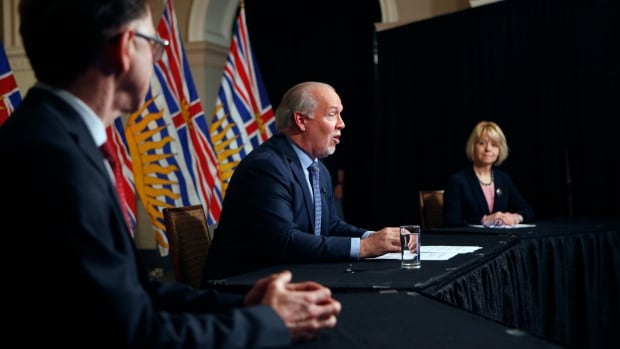 B.C. has released details of how it plans to manage COVID-19 and influenza cases in the fall and winter months and prevent a combination of the two from straining the province’s health-care system.

A key part of the strategy, announced on Wednesday by Premier John Horgan, Health Minister Adrian Dix and Provincial Health Officer Dr. Bonnie Henry, involves reducing the usual demand for hospital beds by reducing seasonal flu cases, while boosting hospital surge capacity if there is a sudden influx of patients.

The plan will inject $1.6 billion into the health-care system and involve the strategic hiring and training of 7,000 health-care workers. It aims to avoid a scenario where surgeries must be widely delayed, as the province did in the spring as part of its emergency response to the pandemic.

It will also be launching a major vaccination campaign against influenza, with the goal of vaccinating nearly two million people, compared to the yearly average of around 1.4 million.

“Our pandemic plan has been working,” said Horgan. “We need to accelerate. We need to up our game.”

Vaccination on a scale ‘not yet seen’

Henry said B.C.’s vaccination strategy will be on a scale “not yet seen” and encouraged everyone in the province over the age of six months to get vaccinated against influenza.

“The good news is that their immunization rates were very high. This triggered us to buy more vaccine here,” she said, adding that measures like physical distancing, masks, and handwashing also protect against influenza.

The plan also focuses on boosting the capacity to conduct contact tracing and COVID-19 testing, with the goal of being able to test 20,000 people per day, compared to the current capacity of around 8,000 to 10,000 tests.

B.C. will also launch a “hospital-at-home” program, where eligible patients will be able to receive treatment in their own homes, further easing demand on hospital beds and preventing the spread of the virus within health-care settings. The province says it has 533 “base beds” for COVID-19 patients spread across 19 hospitals.

The new approach will also manage hospitals by region, meaning there will be no system-wide reduction in hospital bed occupancy, like the one implemented in March.

Dr. Bonnie Henry says groups of trick-or-treaters will have to be kept small and candy likely left at the end of driveways. 0:35

Another key part of the plan is to protect B.C.’s vulnerable seniors population, which bore the brunt of the pandemic in the spring. Two thousand more staff will be hired in the province’s long-term care homes, along with 5,000 additional health-care aides.

The province has also ordered 45,000 fluzone-high doses of the influenza vaccine for high-risk seniors, which will be made available to all residents of long term care and assisted living.

Dix said the province is preparing for four potential scenarios.

Horgan said he is confident the province’s plan will protect the health-care system in the coming months.

“Seven months later, we know a great deal more than we did then. I’m very confident that the plan announced today will create more safety in our long-term care sector.  Our acute care sector will be better prepared. We will continue to put in place the resources British Columbians need,” he said.

Cases on the rise

On Tuesday, Henry announced that 429 new cases of COVID-19 were recorded in B.C. over the long weekend, bringing the total number of cases since the pandemic began to 6,591.

A number of exposure events at nightlife venues caused the province to amend public health orders on Tuesday, ordering nightclubs and stand-alone banquet halls closed, ending the sale of liquor at restaurants past 10 p.m. and telling venues to reduce the volume from music or other sources to conversational levels.

The amendment represented the first time B.C. has significantly pulled back on steps that had been taken to reopen the province since May.

Henry also reiterated that B.C. residents should be easing up on social interactions as the fall approaches, reining in bubbles to five or six people, emphasizing the province must keep community transmission of COVID-19 low to allow schools to safely reopen.

“Could I have predicted these numbers? No. These numbers are concerning to us, but they don’t reflect the widespread community transmission that has overwhelmed health-care systems,” she said.