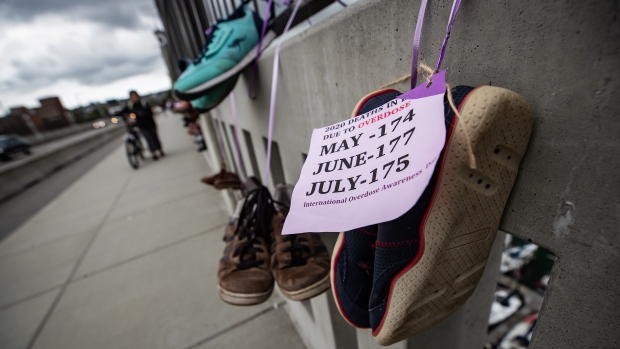 VANCOUVER — On the fifth anniversary of the province’s other public health crisis, B.C. officials announced they’ll be requesting a federal exemption from Health Canada to decriminalize personal drug possession.

Earlier this year, Sheila Malcolmson, the province’s minister of mental health and addictions, sent a letter to the federal health minister inquiring about the possibility.

In her letter, she asked for a federal approach to decriminalization. But, she wrote, failing that, she’d pursue it on a provincial level.

On Wednesday, Malcolmson announced the province will move forward with a formal request.

“This isn’t about legalization, like what happened with marijuana. This is about possessing a small amount of drugs. So that will no longer be a crime,” said Malcolmson in a news conference.

She reiterated this week what she’s said before: the point of decriminalization would be to address the stigma associated with drug use. She said the shame can prevent people from reaching out for help, which can be life-saving.

It appears the formal request has not yet been made, but Malcolmson said officials with her ministry have already been working with Health Canada on an agreement that would outline how it would work.

Before anything is put in place, consultations will be held with Indigenous partners, peers, law enforcement, municipalities and public health officials, Malcolmson said.

“We know that there is no silver bullet to end the overdose crisis. And that’s why we are working across the continuum of care to build that truly comprehensive system of mental health and addictions care that works for everyone in British Columbia,” said the minister.

The City of Vancouver has already sent a preliminary application to Health Canada.

Malcolmson also announced $45 million in funding over the next three years to address the overdose crisis.

That money will go toward overdose prevention sites, supplying naloxone and supporting outreach teams that connect people to care.

“These services save lives. They provide a lifeline for people to connect to much needed care and support. This investment is part of budget 2021,” said the minister.

CTVNewsVancouver.ca is streaming a news conference on the opioid crisis LIVE @ 10.

This is a developing news story and will be updated.