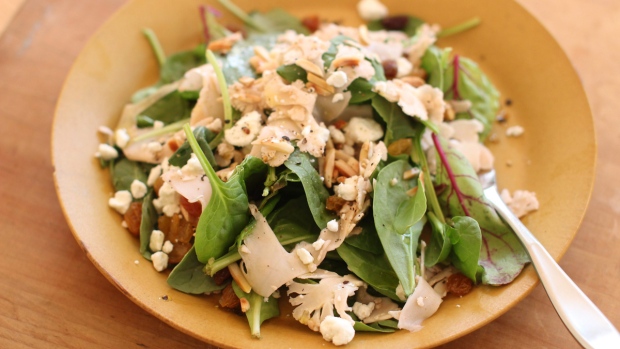 Bagged salad is a quick and easy way to get your greens but a series of recalls is highlighting a not-so-appetizing fact — prepped produce also carries a greater risk of bacterial contamination.

Amid yet another salad recall falling in the midst of holiday season, health experts say there’s no need to drop the fresh fruits and veggies from your holiday spread, but there are ways to mitigate the risk of food-borne illness.

The first thing is to understand that pre-washed and chopped produce is not always as clean as it looks, says food safety expert Jennifer Ronholm, an assistant professor in the agricultural and environmental sciences faculties at McGill University

“We know that bagged lettuce is inherently more problematic for contamination than the not-bagged lettuce (or) just buying a head of leaf or iceberg or romaine or whatever,” says Ronholm, noting the bagged stuff occasionally includes juices that are a very good medium for bacterial growth.

“When you cut leafy greens up for one of the bagged salads, the bacteria can actually go and enter the wounds of the plant and hide out inside of the leavesΓÇª. These leaves are washed in chlorinated water to surface-decontaminate them, (but) once they’re cut you could have bacteria inside the leaves.”

Meanwhile, a head of iceberg or romaine gets a single cut at the root, which consumers should trim again when they bring the head home, in addition to shedding the outer leaves, she says.

Several big recalls and warnings in the past few weeks have raised extra concern about leafy greens in particular.

The Canadian Food Inspection Agency recalled a specific variety of Fresh Express brand Sunflower Crisp Chopped Kit on Dec. 8 after their investigation into an outbreak of food-borne illness found E. coli O157:H7. As of Dec. 11, the Public Health Agency had linked the particularly nasty strain to 24 illnesses, including six people who were hospitalized. One person developed a type of kidney failure.

The agency warned consumers to throw away affected products and sanitize containers used to store it, since this strain of E. coli is especially harmful to pregnant women, those with weakened immune systems, young children and older adults.

That recall came on the heels of another on Dec. 3 in which the CFIA recalled a specific variety of President’s Choice brand coleslaw after detecting possible salmonella contamination.

Then there is the expansive warning in the United States and Canada to avoid all romaine lettuce grown in or near Salinas, Calif., due to an E. coli outbreak, including salad mixes, whole heads, and romaine in salad wraps.

The CFIA says it requires all romaine imports from California to prove it does not come from the Salinas region.

Despite the scares, food researcher Sylvain Charlebois says such frequent alarm bells show the system is working. He contrasted it to the confusion of a similar romaine lettuce scare a year ago.

“Last year, the holiday season was a complete disaster for leafy greens because we never were able to recall anything,” says the Dalhousie University professor, who is director of Dalhousie’s agri-food analytics lab.

“We didn’t know where the source of the outbreak was until very late.”

Food safety investigators have refined detection methods to track contamination, even in cases where a mix of greens might involve multiple farms from various regions, he says.

“This is the new normal,” Charlebois added of an increasingly complex network to meet consumer demand for a variety of fresh greens.

“As soon as you have one recalled product you are affecting millions of consumers because distribution channels are so widespread now.”

Indeed, a new study finds leafy greens were among the top food items recalled between 2000 and 2017.

Food science professor Lawrence Goodridge of the University of Guelph teamed with researchers from Dalhousie to find that 10,432 products were pulled from store shelves, most of them meat, nuts, cheese, and leafy greens.

Salmonella and listeria monocytogenes were each responsible for about a quarter of the recalls, while E. coli 0157:H7 accounted for 12.7 per cent.

“One rule of thumb is the more a product is manipulated, the higher the chances of contamination,” says Goodridge, of the Canadian Research Institute for Food Safety at the University of Guelph.

Even though lettuce does get multiple washes in a chlorinated bath, such rinses don’t completely eliminate E. coli or salmonella, which tend to come from fecal contamination, he says, noting animals may run through the field and contaminate irrigation or the actual vegetable.

A heavy rainfall can also send manure from nearby animal facilities into the irrigation system or soil.

Listeria is found everywhere naturally and likes to grow in wet, damp areas, Goodridge says. That includes food processing plants, where it can thrive if equipment is not cleaned properly.

“Realistically it’s a tradeoff that the consumer has to make and acknowledge that they’re making,” she says.

“For my lifestyle, I’m wiling to sacrifice a bit of safety for the convenience of the bagged salad.”

This report by The Canadian Press was first published Dec. 17, 2019