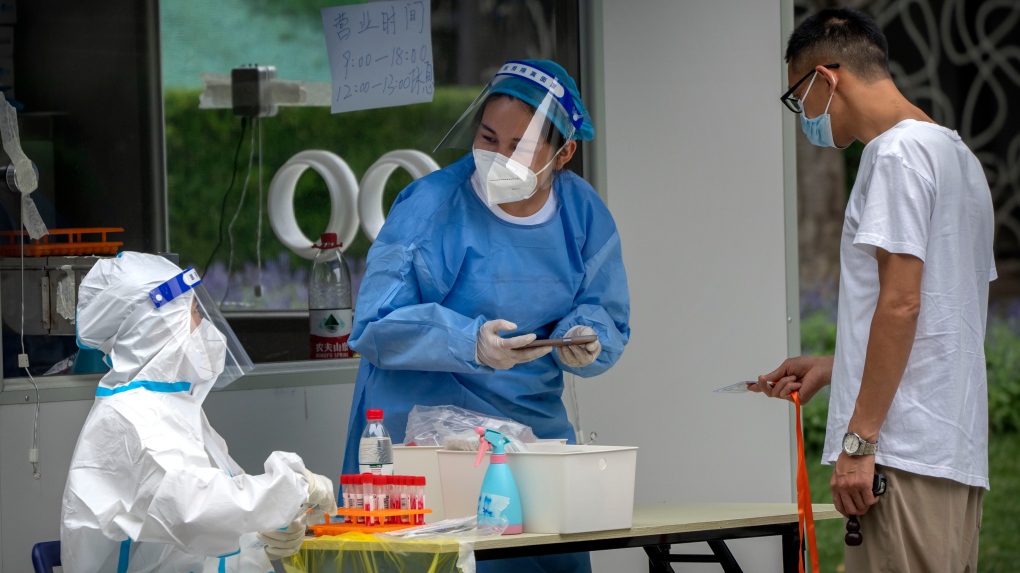 China’s capital Beijing is facing an “explosive” COVID-19 outbreak connected to a bar, a government spokesman warned on Saturday, as the commercial hub of Shanghai began mass testing to contain a jump in cases tied to a popular beauty salon.

The warning followed a renewed tightening of COVID curbs in Beijing since Thursday, with at least two districts – including its most populous, Chaoyang – closing certain entertainment venues after a flare-up in a busy neighborhood known for its nightlife, shopping and streets of embassies.

While China’s infection rate is low by global standards, President Xi Jinping has doubled down on a zero-COVID policy that authorities say is needed to protect the elderly and the medical system, even as other countries try to live with the virus.

The latest cases in Beijing were linked to a drinking establishment known as Heaven Supermarket Bar. Infections have since surged, with Beijing saying on Saturday that all of the 61 new cases uncovered in the city on Friday had either visited the bar or had links to it.

“The recent outbreak of cases related to Heaven Supermarket Bar is strongly explosive in nature and widespread in scope, and the composition of the individuals involved is also complex,” Xu Hejian, spokesman of the Beijing municipal government, said at a news briefing.

The capital reported 46 new local COVID cases on Saturday as of 3 p.m. local time (0700 GMT), health official Liu Xiaofeng told the same briefing. All cases were discovered among individuals already in isolation or under observation, Liu said. The city did not announce new curbs at the briefing.

So far a total of 115 cases and 6,158 close contacts linked to the bar have been reported, throwing the city of 22 million back into a state of anxiety.

Less than two weeks ago, Beijing had relaxed COVID curbs imposed to fight a major outbreak that began in April.

With the COVID resurgence, the sprawling Universal Beijing Resort – a theme park on the city’s outskirts – late on Friday rescinded a plan to reopen, saying it would remain closed until further notice. Three of its workers had visited the Heaven Supermarket bar, according to Beijing authorities.

Many neighbourhoods in the capital have been put under lockdown, with residents told to remain at home.

In Shanghai, city officials announced three new confirmed local cases and one asymptomatic case detected outside quarantined areas on Saturday, as nearly all the city’s 25 million residents began a new round of COVID tests.

Authorities have ordered PCR testing for all residents in 15 of Shanghai’s 16 districts this weekend, with five districts barring residents from leaving their homes during the testing period. Shanghai residents should complete at least one PCR test a week until July 31, a city official told a press conference on Saturday.

The new tests come just 10 days after the city lifted a two-month lockdown aimed at eliminating the community spread of COVID-19, sparking concerns among many residents who grappled with lost income, the loss of freedom, the death of friends and relatives, and even hunger during that period.

“I am a little bit worried because if there are positive cases in the compound, it will be put into a sealed situation,” said Shi Weiqi, a Shanghai resident. “I will also stock up on some supplies properly in case the previous situation happens again.”

On Saturday, Shanghai reported seven new local symptomatic cases for the previous day, one more than a day earlier, of which six were detected outside of quarantined areas.

In total, mainland China reported 210 new coronavirus cases for June 10, of which 79 were symptomatic and 131 were asymptomatic, the National Health Commission said on Saturday.

That was up from 151 new cases a day earlier – 45 symptomatic and 106 asymptomatic infections, which China counts separately.

As of Friday, mainland China had confirmed 224,659 cases with symptoms.