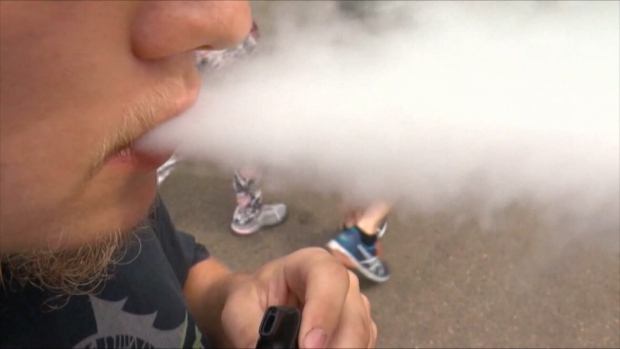 Experts think last year’s outbreak of vaping related illnesses and deaths may have scared off some kids, but they believe other factors contributed to the drop, including higher age limits and flavour bans.

The survey suggests that the number of school kids who vape fell by 1.8 million in a year, from 5.4 million to 3.6 million, officials said.

But even as teen use declined, the report shows a big bump in use of disposable e-cigarettes. The Food and Drug Administration earlier this year barred flavours from small vaping devices like Juul and others that are mainly used by minors. The policy did not apply to disposable e-cigarettes, which can still contain sweet, candylike flavours.

“As long as any flavoured e-cigarettes are left on the market, kids will get their hands on them and we will not solve this crisis,” Matt Myers of the Campaign for Tobacco Free Kids said in a statement.

The national survey is conducted at schools each year by the Centers for Disease Control and Prevention and usually involves about 20,000 middle and high school students. It asks students if they had used any vaping or traditional tobacco products in the previous month. The survey was cut short this year as schools closed because of the coronavirus pandemic.

But they also acknowledge the outbreak probably played a part. The CDC’s Brian King said sales started falling in August — when national media coverage of the outbreak intensified.

“It’s possible that some of the heightened awareness could have influenced decline in use,” said King.

By the time the outbreak was winding down early this year, more than 2,800 illnesses and 68 deaths had been reported. Most of those who got sick said they vaped solutions containing THC, the ingredient that produces a high in marijuana. CDC officials gradually focused their investigation on black market THC cartridges, and on a chemical compound called vitamin E acetate that had been added to illicit THC vaping liquids.

Kenneth Warner, a professor emeritus at the University of Michigan’s school of public health, said the teen vaping drop was larger than expected.

“This does look like a very substantial decrease in a single year and it’s very encouraging,” said Warner, a tobacco control expert.

Among the likely factors, Warner noted the general negative publicity surrounding vaping. Additionally, Juul preemptively pulled all its vaping flavours except menthol and tobacco last fall ahead of federal action.

Warner and other researchers have tracked a recent decline in teen smoking to all-time lows — about 6% — even as vaping has increased. He said it will be critical to watch whether teen smoking begins rising again as fewer teens vape.

The new figures were disclosed on the same day that all U.S. vaping manufacturers faced a long-delayed deadline to submit their products for FDA review. Generally, that means the vaping companies must show that their products help smokers reduce or quit their use of cigarettes and other tobacco products.

E-cigarettes first appeared in the U.S. more than a decade ago and have grown in popularity with minimal federal regulation.

The Associated Press Health & Science Department receives support from the Howard Hughes Medical Institute’s Department of Science Education. The AP is solely responsible for all content