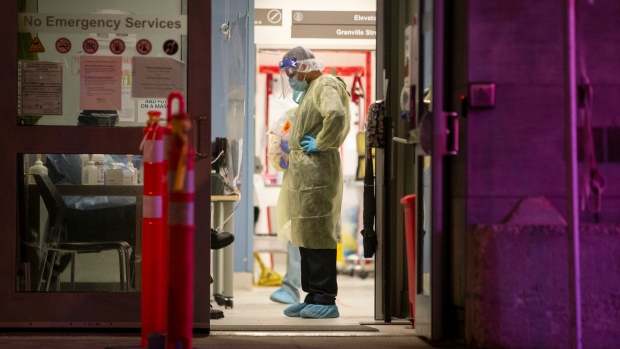 University Health Network scientist Ewan Goligher said Friday that blood thinners could soon be part of standard care after the interim results of global trials showed Heparin reduced the probability of requiring life support by about a third.

The news comes on the heels of promising early data for another COVID-19 drug targeting seniors, as health systems across the country wrestle with the impact of a recent surge in cases and long-term care homes battle devastating outbreaks.

Considering how many people around the world end up in intensive care because of COVID-19, Goligher said this finding is “massive.”

“They’re very, very ill, they’re often in the ICU for a long time. It’s a devastating life event,” Goligher, a critical care physician at Toronto General Hospital, said of the patients he sees.

“Even if they do survive, it means immense suffering, and to prevent people from becoming critically ill is huge.”

Goligher, co-chair of the therapeutic anticoagulation domain of the trial, said he expected patients at his downtown hospital would be on routine blood thinners “imminently,” and “fully expected” hospitals around the world would, too.

“Before people change their practice they’re going to want to see the full paper published so we’re working very hard now to write up the results and get them published in a high impact journal,” he said.

“One of the exciting things about this treatment is that Heparin is already cheap, widely available, and available in low and middle-income countries, as well as countries like Canada and the United States. So this is a cheap therapy that can make a significant impact on outcomes for patients.”

Goligher said researchers still needs to look into other questions surrounding blood thinners, such as whether to continue treatment if a moderately ill patient develops severe COVID-19, and whether adding an antiplatelet agent would help.

Doctors noticed early in the pandemic that COVID-19 patients suffered an increased rate of blood clots and inflammation. This led to complications including lung failure, heart attack and stroke.

Back in December, investigators found that giving full-dose blood thinners to critically ill ICU patients did not help, and was actually harmful.

However, Goligher noted there have been other drugs that appear to ease mortality in severe cases, expecting more trials to release promising data soon.

Goligher was heartened by the news that blood thinners could soon ease a devastating winter surge of infections.

“I personally find the thought that this treatment will prevent (patients) from getting to this state incredibly gratifying. It’s even better than if it was an effective treatment for severe COVID-19, to be able to prevent people from becoming severe is huge.”

Early data from a Phase 3 trial found that in addition to offering therapeutic value, bamlanivimab “significantly” reduced the risk of contracting symptomatic COVID-19 among 965 residents and staff of long-term care facilities in the U.S.

Health Canada has approved its use as a therapy for mild to moderate cases of COVID-19, but not to prevent infection. A spokesman for Eli Lilly Canada said the company expected to present the new data to Health Canada, but noted their findings were still early.

In November, Prime Minister Justin Trudeau announced Canada had purchased 26,000 doses of the drug, with shipments to arrive between December 2020 and February 2021.

But Lauren Fischer, VP of corporate affairs for Eli Lilly Canada, says the drug is not being used on patients here yet. Fischer said the provinces have raised “some implementation concerns” about bamlanivimab, which involves an hour-long intravenous infusion.

“The provinces are still considering their approach to making it available but we haven’t seen a lot of progress on that,” Fischer said.

“The provinces have really moved with commendable speed on vaccinations, they’ve shown that they can overcome implementation difficulties to make needed solutions available…. We stand ready to partner with provincial governments as they try to make those solutions happen.”

The drug is meant for patients over the age of 65 with underlying conditions. Dr. Doron Sagman, Eli Lilly’s VP of research and development and medical affairs, said the early data suggests some level of protection for older Canadians waiting for a COVID-19 vaccine, or if their immune response to a vaccine is not as robust as others.

“The intent again is to provide a therapeutic bridge to those vaccines and fill a gap in those individuals who have been affected by the illness and have not yet been vaccinated,” said Sagman.

This report by The Canadian Press was first published Jan. 22, 2021.