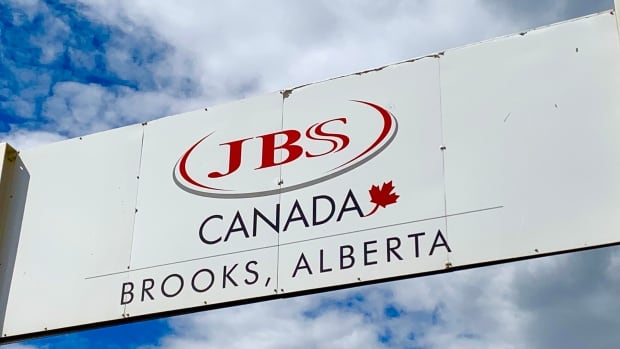 One day after a major meat-processing plant in High River, Alta., said it would shut down amidst a COVID-19 outbreak, another facility in the province that has dozens of cases among its employees says it is down to one shift due to “increased absenteeism” but will continue to operate.

​​The JBS plant in Brooks had 67 confirmed COVID-19 cases among its employees as of the Alberta government’s update Monday afternoon but said Tuesday that no one has been laid off.

“We will endeavour to keep our facilities open, but we will not operate a facility if we do not believe it is safe or if absenteeism levels results in our inability to safely operate,” reads a statement from the company.

Brooks Mayor Barry Morishita said there’s a lot of work being done to determine the root cause of the outbreak in the city, but it seems to be outside of the JBS facility.

“We don’t have a lot of evidence that it’s being spread at the workplace,” he said.

“Primarily it seems to be spreading in the community, at homes and at social gatherings and that sort of thing. There’s a lot of work being done to try and figure all of that out.”

Workers at the Cargill plant that closed told CBC News they felt pressured to return to work where they were forced into cramped conditions and unable to physically separate.

The company said it had implemented preventative measures to stop the spread of the virus.

On Tuesday, Prime Minister Justin Trudeau said the government is keeping a close eye on the country’s food supply chain in wake of the closure of the Cargill plant, which is responsible for one-third of Canada’s beef supply.

In the U.S., meat-packing plants across the Midwest have reported hundreds of coronavirus cases among their tightly quartered work forces. Several have shuttered in an attempt to stem the spread.

Conscious of potential for backlash: mayor

Moroshita anticipated the number of cases in Brooks, which hit 115 in total as of Monday afternoon, would rise after the province gave its daily update again Tuesday afternoon.

He said the city is working closely with AHS to set up screening sites.

The mayor says they’re conscious of the potential for backlash in Brooks because the JBS workforce includes a lot of Canadians from the South Sudanese community and other visible minorities.

“We have to be aware of that and we have to keep messaging that these were great members of our community before and, if we’re all being good citizens, we don’t need to worry about it,” Moroshita said.

“In the space of this pandemic with a lot of unknowns, unknowns tend to filter through fear and when you filter unknowns and fear together, you can have some tough situations and we’re not blind to the fact that we’re going to face a few of those in the days ahead.”

“We’ve heard from Canadian beef producers and associations that the priority will be ensuring Canadian supply before they move to exporting. Much of our beef is exported,” he told reporters.

“But right now, the priority will be on domestic supply. We are not, at this point, anticipating shortages of beef, but prices might go up. We will, of course, be monitoring that very, very carefully.”

The president of the Agriculture Union that represents federal meat inspectors says it’s a matter of time before JBS is forced to temporarily halt production as well.

Fabian Murphy says a 14-day shutdown would allow all employees to self-isolate and, after that, production could resume.