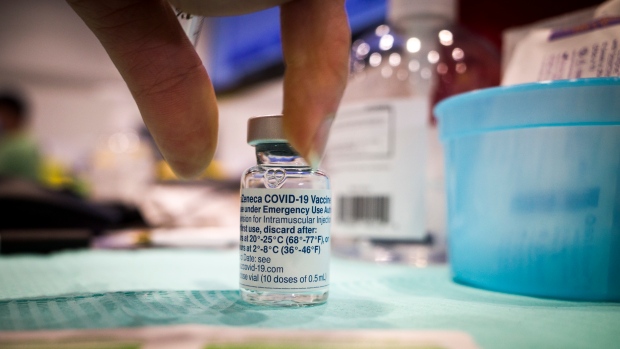 TORONTO — A Calgary researcher says doctors need to be keenly aware of the risks of the rare side effects linked to the AstraZeneca vaccine, which can happen to anyone regardless of age or sex, after a case of a 63-year-old man who was admitted to hospital with blood clots in his leg.

As described in a new case study published in the Canadian Medical Association Journal, the patient was admitted to the emergency department after experiencing pain and coldness in his left leg for five days. He had received his first dose of the AstraZeneca vaccine 20 days prior to the onset of his symptoms

Tests at the hospital showed that he had a low blood platelet count and extensive blood clots in his leg and lungs.

“Usually, you just get a blood clot in one part of the body, but not in two very different parts of the body. So, his presentation to the hospital was typical of VITT, but VITT itself is a condition that has very unusual features to it,” said Petrasek, who is one of the authors of the case study, in a phone interview with CTVNews.ca.

Doctors performed vascular surgery on the patient and also administered immunoglobulin, which are antibodies that are collected from blood donations.

“It was used decades ago for deadly infectious disease treatment before the days of antibiotics, but in this case, it’s an old-fashioned treatment that we give and it actually blocks the antibody that causes the damage in VITT,” Petrasek said.

While cases of VITT are extremely rare, Petrasek says doctors need to be on the lookout for these side effects.

“If (a patient) come to an emergency department within 30 days of (receiving) that vaccine with a blood clot and a low platelet count, doctors need to suspect that they may have VITT. And the earlier it’s suspected and it’s tested for, the earlier we can direct treatment. And the earlier the treatment, the greater the chance of avoiding injury or death,” Petrasek told CTVNews.ca.

The case study also adds to the growing body of evidence that VITT, while rare, can affect anyone regardless of age and sex.

Blood clots linked to the AstraZeneca vaccine were thought to have be more common among younger people, particularly women, based on early data that came out of Norway. Health Canada had initially restricted the AstraZeneca vaccine to those aged 55 or above before gradually decreasing the age. Many countries in Europe also set their own minimum age restrictions for the vaccine.

However, the authors of the case study note that all the patients who were part of the Norwegian study were healthcare workers below the age of 65, and 80 per cent of them were female.

“The first reports of VITT clearly had a selection bias in that they were from select populations of these young healthcare workers,” said Petrasek.

The case study cites data from the U.K., a country which has given out nearly 30 million doses of the AstraZeneca vaccine and where cases of VITT have been identified among a broad age range, with only a slightly higher number of cases in female patients.

Nonetheless, Petrasek calls the AstraZeneca vaccine “life-saving,” given the rarity of blood clots and the relative danger of COVID-19.

According to a companion study to this case study from researchers at Unity Health in Toronto, the risk of experiencing VITT is estimated to be between one in 26,000 and one in 127,000.

As for the 63-year-old patient, Petrasek says the man will lose a part of his foot, but his condition has improved significantly after treatment.

“We had a little bit of a period of time where we were trying to figure out why he wasn’t getting better. But when we came upon the diagnosis of VITT and confirmed it and gave the treatment for it, he had a remarkable turnaround in his health,” Petrasek said.​