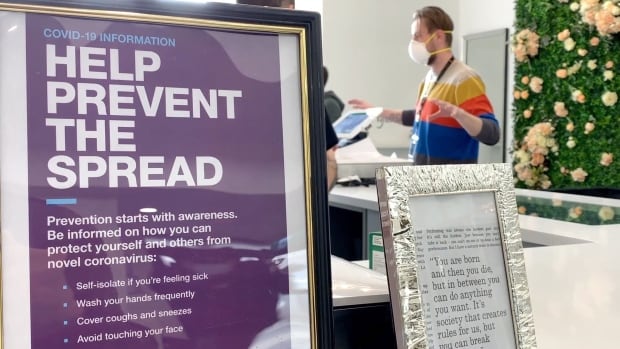 Citing the rising numbers of coronavirus cases, the city of Calgary says it will make masks mandatory in all indoor public spaces starting Aug. 1.

Council voted 12-3 in favour of the new bylaw on Tuesday, with Councillors Sean Chu, Jeromy Farkas and Joe Magliocca voting against. Officials say they hope the mask bylaw will limit the spread of the coronavirus and prevent another lockdown.

“We need to take bold action now if we want schools to reopen, if we want kids to feel safe, if we don’t want to close the economy again,” Calgary Mayor Naheed Nenshi said.

Experts have expressed concern about Alberta’s rising COVID-19 cases, half of which are in Calgary. The province reported 509 new cases in the last four days, bringing the active case total to 1,193.

He said provincial health officials have supported the idea of a mask bylaw.

Similar rules have been put in place across Quebec municipalities, and in Toronto and Ottawa.

The bylaw, which will require people to wear a face covering that covers their mouth, nose and chin, would apply to all indoor public spaces in the city, like malls and grocery stores, as well as on Calgary Transit, or in taxis or Ubers.

It does not include schools, daycares and multi-family residential buildings.

Those who fail to wear a mask could be fined $100, but city officials say the focus will be on education over ticketing.

It will not apply to children under age 2, people with underlying medical conditions that inhibit their ability to wear a mask, people who are eating or drinking, or people who are engaging in a fitness activity, among other exemptions.

“I think given the very, very worrying numbers that we’re seeing in Calgary … Calgarians need to appreciate that without a significant move now, we might be spending Christmas or Thanksgiving alone in our houses,” Coun. Evan Woolley said.

“We’re not playing here, this is serious and people are suffering,” said Coun. Druh Farrell.

Coun. Magliocca, who voted against the bylaw, said he could not support what he described as further government interference in people’s lives.

On Monday, United Nurses of Alberta President Heather Smith wrote a letter to the mayors of Alberta’s six largest cities, asking them to mandate the wearing of face coverings in public spaces.

“I know that our members are reminded daily of the gravity of this pandemic, the serious health consequences COVID-19 poses, and the rationale behind the effectiveness of mask wearing to suppress the spread of this dangerous new virus,” she wrote.

“Public health shouldn’t be a partisan political issue,” he tweeted.

The final details will be discussed and voted on by council next Monday, in advance of the bylaw taking effect.