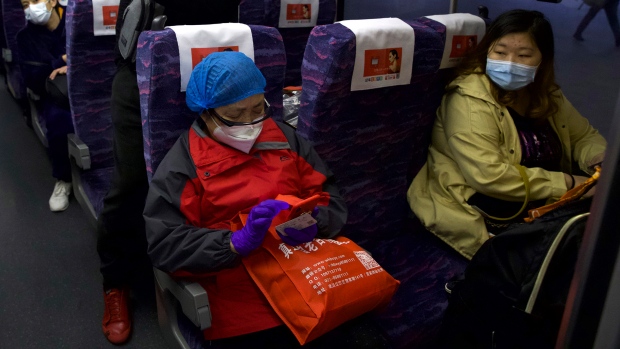 TORONTO — Physical distancing is necessary to reduce the spread of COVID-19 on public transit, according to a first-of-its-kind study examining data from China’s busiest train.

The researchers behind the study say their findings show that there is a “high transmission risk” for COVID-19 among transit passengers, with those sitting directly beside an infected person facing the most risk of all.

The study was published July 29 in Clinical Infectious Diseases and conducted by researchers from various Chinese institutions and the University of Southampton in the United Kingdom.

Using data from Chinese health authorities and rail timetables, they were able to identify 2,334 “index patients” – passengers who started to show COVID-19 symptoms within 14 days of their trip and were diagnosed with COVID-19 – and 72,093 other passengers who sat within three rows and five seats of those index patients.

All of the trips were taken on China’s G trains between mid-December and late February, as the novel coronavirus was spreading beyond Wuhan to the rest of China and the rest of the world. The G trains account for the majority of Chinese passenger rail trips and carry more passengers than all of the country’s airlines combined.

According to the study, 234 of the 72,093 passengers who sat near an index patient ended up testing positive for the disease themselves. That works out to 0.32 per cent, a number the researchers call the “attack rate.”

The researchers offered several theories as to why passengers in the same row were more likely to be infected, including that it could be easier for the virus to spread without seats and headrests blocking its path, that passengers are more likely to have close contact with others in their row as they move around to accommodate bathroom breaks and departures, and that families and friend groups tend to travel together and may be more likely to talk to each other and interact in other ways that can facilitate virus transmission.

Whether the index patient or the other passengers were sitting in aisle, middle or window seats did not seem to make a difference in the infection patterns.

Trip duration, however, was a factor. The researchers found that the attack rate increased by 0.15 per cent per hour of travel time, and by 1.3 per cent per hour for those passengers sitting right beside the patient.

The researchers also identified 1,342 cases in which a passenger took a seat that had just been vacated by an index patient. One of these 1,342 passengers later tested positive for COVID-19.

The study does not prove that any of the 234 passengers who contracted COVID-19 after sitting close to an index patient definitively caught the virus while on the train, although all of them were considered by health authorities to have most likely contracted it in that setting. Additionally, the study does not account for passengers who moved out of their assigned seats or the possibility that people working on the train may have spread the virus.

Despite those limitations, the researchers say that their findings show the importance of distancing and taking other precautions when using public transit during the pandemic.

“During disease outbreaks, when travelling on public transportation in confined spaces such as trains, measures should be taken to reduce the risk of transmission, including increasing seat distance, reducing passenger density, and use of personal hygiene protection,” they wrote.

“To prevent COVID-19 spread during an outbreak, the recommended distance is at least 2 seats apart within the same row, with travel time limited to 3 hours.”