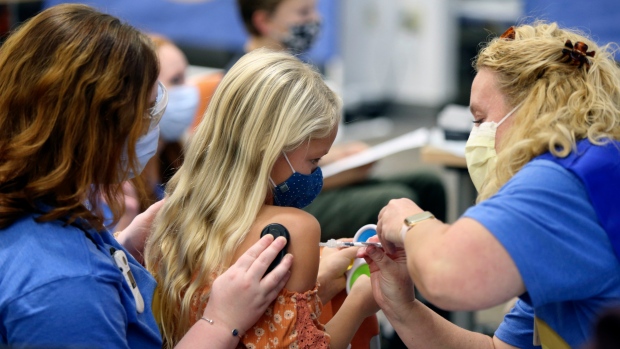 Health Canada says a decision on whether to authorize a COVID-19 vaccine for children will come “in the next one to two weeks,” leaving open the possibility that some kids could be at least partially protected by Christmas.

The news comes as parts of Canada see an uptick in COVID-19 cases in the weeks leading up to the holiday season.

Canada’s chief medical adviser Dr. Supriya Sharma said in a conference call with reporters Friday that the regulator is “actively continuing” its review of the Pfizer-BioNtech jab for children aged five to 11, which was authorized for use in the United States earlier this month.

Dr. Theresa Tam, Canada’s chief medical officer, noted that the under-12 population – the only age group still ineligible for the vaccine – continues to have the highest incidence rates of COVID-19 across the country.

COVID-19 has typically shown to be mild in children since the pandemic began, but some kids have had serious illness. They can also spread the virus to others.

“We have a dedicated team that’s looking at that (children’s vaccine) data … and we look at that in the Canadian context for the possible use in children,” Sharma said. “That review is actively ongoing and we expect to have a final decision in the next one to two weeks.”

Authorization within the next two weeks could give kids access to a first jab – and potentially a second – by Christmas, provided Canada receives supply of the smaller, kid-specific doses right away and that provinces can roll out the vaccine swiftly.

The U.S.-based Centers for Disease Control and Prevention has authorized second doses for children three weeks after the first shot. But Canada’s National Advisory Committee on Immunization could recommend spacing out the jabs over a longer interval.

“If we want to have gatherings, it’s best for everyone who attends the gathering to be vaccinated,” he said. “This might be a good reason to motivate family members who are partially vaccinated or unvaccinated to complete their vaccination series in order to participate in gatherings.”

Njoo said Canadian jurisdictions need to remain “flexible” as the holiday season approaches, and be ready to reintroduce previously relaxedrestrictions or new ones “if cases are on the rise.”

Tam noted an 11 per cent increase in new COVID-19 cases in Canada this week compared to last, with 2,500 new cases reported daily.

More than 1,800 people with COVID-19 were hospitalized, she said, with 528 in intensive care units and an average of 22 deaths reported daily.

Ontario released modelling Friday suggesting ICU occupancy will increase to approximately 200 patients by the new year if a recent spike in infections – seen in most of the province’s health units – continues to trend upwards. There were 130 patients in Ontario intensive care due to COVID-19 as of Friday.

Tam said that much of the country is “experiencing a bit of turbulence this week.”

“With a highly contagious Delta variant continuing to predominate, the risk for surges in disease activity is likely to increase with more time spent indoors, particularly where there are pockets of low vaccine coverage,” Tam said. “As well, given evidence of waning vaccine protection in some situations, there may be an increased risk of severe illness.”

Tam also said the country’s requirement for a negative COVID-19 test for travellers re-entering Canada was still under review.

Tam said in the news conference that the requirement is for a “molecular test,” which can include a lab-based PCR or other tests that can offer results more quickly. Health Canada’s website says rapid antigen tests are not accepted.

More than 28 million people, or 85 per cent of the eligible population over age 12, are now fully vaccinated, Tam said, though “sizable gaps in vaccine coverage” remain.

She said that includes more than five million eligible people who have not yet received a vaccine, and more than 4.3 million children under the age of 12.

Also Friday, Health Canada approved the use of Moderna’s mRNA vaccine for booster shots for adults 18 and older, to be used at least six months after the second shot. The Moderna booster is a half-dose of the regular vaccine.

This report by The Canadian Press was first published Nov. 12, 2021.