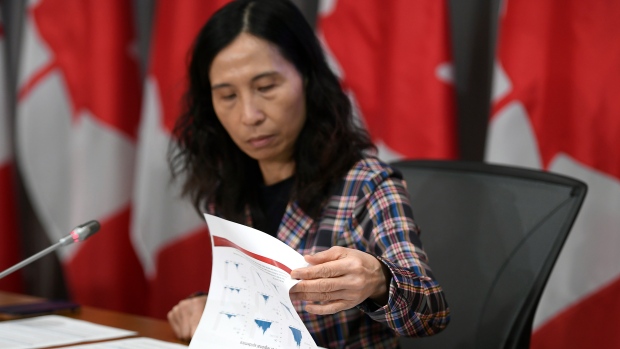 OTTAWA — Canada is headed towards a fourth wave of COVID-19 infections, but how severe of a resurgence it’ll be depends on how many people are fully vaccinated, warns new national modelling released Friday.

The country is seeing an increase in new COVID-19 cases, and thousands more infections are predicted if contacts aren’t contained, the modelling indicates.

The new picture on Canada’s pandemic trajectory shows the serious threat the highly-contagious Delta variant is posing, and the risk that the unvaccinated may be to the country being thrust into a fourth wave of the disease.

“The updated longer-range forecast shows how the epidemic trajectory may evolve through early September. It suggests that we are at the start of the Delta-driven fourth wave, but that the trajectory will depend on ongoing increases in fully vaccinated coverage, and the timing, pace and extent of reopening,” Chief Public Health Officer Dr. Theresa Tam said.

After weeks of sustained decline in new cases, the Public Health Agency of Canada is warning that if community-wide contact rates increase too quickly with ongoing reopening efforts, the long-term forecast indicates Canada could experience a “stronger resurgence” of the virus.

Ultimately, factoring in the spread of Delta, hospital capacity could be exceeded this fall or winter if more people don’t get vaccinated, the modelling indicates.

The predominance of the Delta variant “underscores the need for high vaccination coverage and continued caution as restrictions are eased,” the modelling states.

“If we can get to 90 [per cent vaccinated], I’ll be popping over the champagne for sure,” Tam said.

One sign that Canada’s case counts are on an upward trajectory: the national “Rt” or effective reproduction number, recently started trending above one around mid-July, meaning there are “early signs of epidemic growth” in some regions. This comes after the “Rt” had remained out of a growth pattern since April.

“If the ‘Rt’ remains persistently above one for several weeks, with the predominance of the highly contagious Delta variant, we could expect to see a return to rapid epidemic growth, particularly as measures that slow the spread are eased,” said Tam.

PHAC says it saw a five-fold increase in the proportion of Delta cases in June, reminding that Delta cases have an increased risk for hospitalization, and has reduced vaccine effectiveness against a symptomatic infection. Further, the majority of the Delta cases in Canada are in those who are unvaccinated, or are partially vaccinated.

“People seem to be, in certain areas, tired and forgetting about science, which is unfortunate,” said Dr. Lisa Barrett, an infectious disease expert and assistant professor at Dalhousie University in Halifax, in an interview on CTV News Channel.

89.7 PER CENT OF CASES UNVACCINATED

In an indication that the vaccines are working, the modelling does not anticipate the rate of new deaths to increase along with the uptick in new cases.

Tam said it’s also mostly those who are unvaccinated who are dying after contracting COVID-19.

The federal health officials are now pushing to see a marked increase in vaccination rates in younger populations, warning that if they don’t increase in the coming months, Canada could face a “serious resurgence” this fall or winter.

Deputy Chief Public Health Officer Dr. Howard Njoo called out the approximately 6.3 million eligible Canadians who have yet to roll up their sleeves and get vaccinated.

“What are you waiting for?” said Njoo. “This is all very preventable if people go forward and get vaccinated, so let’s go for it. Let’s go.”

Generally speaking, the rate of vaccination decreases in each younger demographic. During the early stages of the rollout, older generations were often prioritized for vaccination ahead of younger ones.

As of last week the percentages in each age group who are fully vaccinated are:

The data also breaks down how each province stacks up on vaccination rates, with Newfoundland and Labrador, Prince Edward Island, and Alberta still having the farthest to go in terms of fully vaccinating its eligible population, while the Yukon and Northwest Territories continue to lead the nation in vaccination rates.