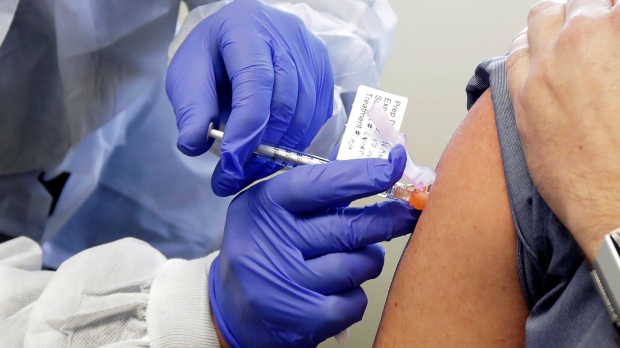 TORONTO — The federal government is still in talks with China over moving forward with clinical trials of a potential COVID-19 vaccine, Prime Minister Justin Trudeau told reporters on Thursday, despite a delay in shipping the drug to Canada.

Trials for Ad5-nCoV, developed by biopharmaceutical company CanSino Biologics along with Chinese government scientists, was supposed to be underway after Health Canada approved it for human testing in May, but progress came to a standstill after Canadian authorities said the Chinese government had yet to sign-off on shipping the drug to Canada.

“We’re obviously continuing to work with the Chinese government to ensure that this work can continue in an uninterrupted fashion,” Trudeau told reporters at a press conference on Thursday.

“This particular approach is one that has worked well in the past. This partnership actually created significant measures against Ebola a number of years ago. And as we’re looking at developing a vaccine, we’re investing in many different approaches to try and figure out where that vaccine will come from.”

Trudeau said some of the world’s top researchers were working in Canada and in collaboration with partners around the world to develop a vaccine that can end the global pandemic.

“We’re trying to follow all the different paths we can to ensure that when a vaccine is developed, Canada will be part of it, or will have access to it,” he said, adding that the need for global co-operation would be balanced with ensuring Canadian intellectual property is protected.

Cyber security agencies in Canada, the United States and the U.K. alleged on Thursday that Russia has tried to steal information and intellectual property from researchers working on a vaccine for COVID-19.

Human trials of the Ad5-nCoV vaccine candidate are already underway in China, with results promising enough that the Chinese government has approved it for use in its military. Normally, testing can take five to seven years, but the anticipated Canadian clinical trials, which would be carried out by the Canadian Center for Vaccinology (CCV) at Dalhousie University in Halifax, was expected to move along much faster due to the urgency of the pandemic.

With files from Ryan Flanagan and Rachel Aiello