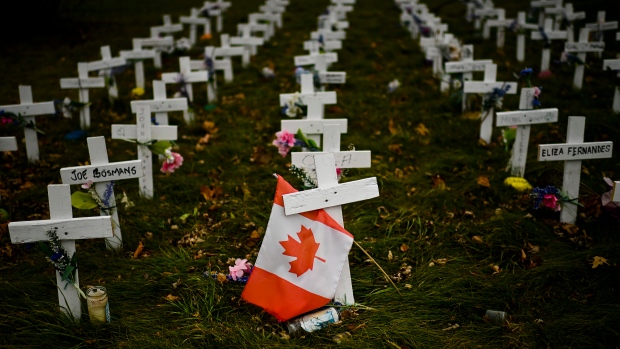 TORONTO — Canada needs a better system to track mortality data across the country, a long-standing problem that has been highlighted by the COVID-19 pandemic, says Dr. Jane Philpott, dean of the Faculty of Health Sciences and director of Queen’s University’s School of Medicine.

“This is not a new problem. This is something that has been long-standing is (in?) that we still don’t have a great process in most parts of the country in order to have timely and accurate mortality data,” Philpott, who was also the minister of health between 2015 and 2017, told CTV News Channel Friday.

While every death is reported, and certificates are issued by a medical professional, a lot of the record keeping is still not done electronically in many parts of Canada, she explained.

“(It’s still) being done on paper … that are being mailed or faxed to the place that will ultimately tally those results. And it’s often up to two years later before we can actually get a good picture as to the cause of death and the number of deaths across the country.”

How many people died because an undiagnosed case of COVID-19 triggered an underlying health issue that ultimately resulted in death? How many died at home because they were too scared to go to the hospital or didn’t think their problem was serious? How many suicides were caused by loneliness and isolation during the pandemic? How many died from opioid and other drug overdoses? And what were the consequences when surgeries and other care were delayed or neglected as a result of the massive shift in focus toward responding to the pandemic?

During the worst period of the first wave in April, 78,839 deaths were recorded in the United States, compared with a five-year average of 54,378 deaths for that same week, according to data tracked by OurWorldInData.org. That data also showed Spain and England experienced a massive spike in excess deaths that exceeded 150 per cent and 110 per cent respectively around the same time as well. Excess mortality refers to the total number of deaths in a population regardless of cause during an unusual event that exceeds the average number of deaths expected under “normal” circumstances. Reuters meanwhile, had reported “scores” dying at home in Italy’s Lombardy region as symptoms went unchecked during the country’s deadliest period of the pandemic.

“There have been different reports, some suggesting that in fact people dying of other causes that are an indirect result of the pandemic are maybe significantly higher than previously (thought),” Philpott added, pointing to the number of overdoses, for example, in British Columbia and Alberta.

In Canada, government data showed that 1,628 people died of apparent opioid overdoses between April and June this year, “representing the highest quarterly count since national surveillance began in 2016,” according to the Public Health Agency of Canada’s website. The figure also represented a 58 per cent increase quarter over quarter, and a 54 per cent increase for the same period year over year.

In a piece on this issue written for MacLean’s magazine, Philpott noted as an example that a recent review of “treatments for seven common cancers showed that even a four-week delay in treatment led to greater mortality” and that “a 12-week surgery delay over a year of lockdown and backlog recovery for these cancers could translate into over 4,800 additional deaths.”

Meanwhile, Canadians 85 and older accounted for more than half of the excess deaths reported during the pandemic, according to data from Statistics Canada last month. Between March and June 2020, 52 per cent of the estimated 7,576 excess deaths recorded were 85 and older, and 36 per cent were between the ages of 65 and 84.

“This reflects the fact that deaths caused directly by COVID-19 disproportionately affected the elderly,” the agency said on its website.

For 90-year-old Nancy Russell, the idea of going through another lockdown in her retirement home without seeing loved ones was too much. She chose a medically-assisted death after her health declined dramatically during the first wave when she had to remain confined due to pandemic safety measures at her home.

Around the world, there have also been anecdotal stories of individuals struggling with the pandemic who died by suicide. In October, Japan reported its highest number of monthly suicides since May 2015 — a figure that exceeded the total number of COVID-19 deaths in the country. But preliminary data from other parts of the world have not shown an increase in suicides. Those figures also remain unclear in Canada, but Canada’s Suicide Prevention Service reported that there has been a 200 per cent rise in the number of calls and texts from October of last year and October of this year, with 15 to 20 per cent mentioning COVID-19.

“There are reports of a possible increase in deaths by suicide for example, but we really just lack the really good data and timely data to be able to make those analyses in order to make good decisions,” said Philpott, who first encountered this issue during her time as federal minister of health.

While some improvements to the reporting system in Canada have been made in recent years, including for overdose deaths, more work is still needed, especially with digitizing the reporting. The pandemic has precipitated the use of electronic death certificates in some cases; Philpott argues that should become the standard going forward. She also advocates for stronger federal public health legislation that would require provinces and territories to share their health surveillance data among the regions and with the federal government.

“Imagine a future where this kind of real-time mortality data could inform policy decisions,” Philpott wrote in her column.