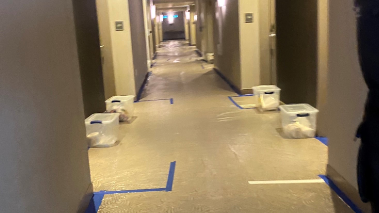 TORONTO — It has been nearly two weeks since the federal government announced new travel measures that require some international travellers to stay at designated hotel quarantine sites.

The facilities are used to house travellers who did not procure a mandatory PCR COVID-19 test, do not have valid quarantine plans, and “unless exempted, all air travellers entering Canada will be required to take a COVID-19 molecular test on arrival, and book a 3-night stay in a hotel to await results,” the federal website reads.

The Public Health Agency of Canada (PHAC) operates the 11 designated hotel sites across the country, but to protect the privacy and safety of travellers, the sites are meant to be kept secret.

The PHAC says there have been 5,030 travellers lodged in the designated hotel sites since Jan. 24.

In order to qualify as a listed site, several prerequisites must be met – including close proximity to Canada’s major international airports, no contact meal delivery services, wireless internet and safe transport to shuttle travellers.

Despite the requests for secrecy, some travellers have been speaking out to CTV News about their stays in the federal isolation hotels – complaining about lack of communication and an environment of secrecy that made one person feel like he was staying in a “jail.”

Mitch Beaulieu landed at Calgary’s international airport after a business trip to Florida, and said he was put into a black van with tinted windows and taken to an undisclosed location.

“I was like… ‘Where am I going, why am I going there?’” Beaulieu told CTV News. “They were like, ‘We’ll tell you everything when you get there.’”

Beaulieu said that when he arrived at the isolation site he thought he “was being punked.”

“Where are the hidden cameras? I thought this was crazy,” he said. “I get out there and there was plastic all over, people walking around in…hazmat suits…it was like jail pretty much.”

Beaulieu said he eventually found out that he was quarantined because he did not have the right kind of COVID-19 test, and that he discovered where he was staying because he caught a glimpse of the building when he was leaving.

Since Jan. 7, all international passengers returning to Canada must show a negative COVID-19 test 72 hours prior to departure.

Another traveller, Angelo Vanegas, stayed at the same Calgary quarantine hotel as Beaulieu after returning from a personal trip to Mexico. Health officials had rejected his quarantine plan upon arrival and he was brought to the hotel to isolate.

Vanegas told CTV News he was allowed outside for “15 minutes a day,” but could not leave his room because of a toe infection, which he claims he had to fight to receive medical attention for.

“I had to beg them, I had to make threats that I was going to call 911 because they were not going to allow me to see the doctor,” Vanegas said.

He also alleged that he was warned by a nurse against telling anyone where he was, and that he could face a hefty fine for doing so.

A traveller who stayed in Toronto’s quarantine site said he did not experience any threats, but did agree that the stay was not necessarily a comfortable one.

“I wouldn’t say it was like a jail, but it was definitely a detention centre,” Steve Duesing told CTV News.

Duesing is now completing his quarantine at home after returning from a trip to North Carolina. He had to stay in the hotel because he took a rapid COVID-19 test, instead of the required PCR test.

“You got food, there was internet, so its not like it was a jail, it was still a hotel room, but definitely not a hotel experience,” Duesing said.

For now, those quarantining have been staying in the isolation sites free of charge, but Prime Minister Justin Trudeau said that will soon change, but no official date has been set for when travellers being picking up the bill.