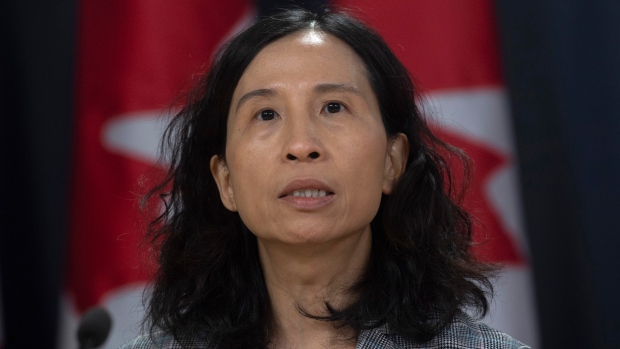 OTTAWA — As Canadian passengers aboard the Grand Princess cruise ship wait for a chartered plane to take them back to Canada from Oakland, Calif., Canadian health officials are warning Canadians to avoid travelling on all cruise ships in order to prevent the spread of COVID-19.

In a press conference Monday, Chief Public Health Officer Dr. Theresa Tam said, while she had previously “asked Canadians to think twice about going on cruise ships,” now the message is unequivocal.

“Today the Public Health Agency of Canada is recommending that Canadians avoid all cruise ship travel due to COVID-19.”

The update comes as Canada prepares to repatriate 237 Canadians aboard a cruise ship set to dock in California on Monday.

Tam pointed out that six of Canada’s confirmed cases are connected to individuals from the first leg of the Grand Princess’ voyage, which occurred between Feb. 11 and Feb 21.

“The virus can spread quickly onboard cruise ships, due to the close contact between passengers,” she said.

Since the novel coronavirus started spreading in late December, Canada has had 72 confirmed and presumptive cases: 34 in Ontario, 27 in British Columbia, four in Quebec, and seven in Alberta.

Ontario’s tally rose to 34 on Monday with the announcement of three new cases.

“Most of Canada’s cases include travellers from an affected area, or their close contacts,” Tam said. B.C. is investigating several cases that have spread in the community among individuals with no known contact to travellers.

The federal government announced Sunday that it would be chartering a plane to transport Canadians from the Grand Princess after it docks. There are approximately 3,500 people on board the vessel. The ship had previously been forbidden from docking in San Francisco due to evidence that it was linked to existing cases.

On Friday, the U.S. government confirmed that 21 people on the ship had tested positive for the virus, including 19 crew members.

“We have been working in close collaboration with our American partners to ensure the return of our Canadians as quickly and as safely as possible,” said Foreign Affairs Minister Francois-Philippe Champagne.

He said that after the Grand Princess docks, Canadians will be examined prior to boarding the plane.

“If they exhibit symptoms, they will not be allowed to board,” he said.

Health Minister Patty Hajdu added that Canadians who cannot get on the plane “will be cared for by the U.S. healthcare system, and our consular services will remain in close contact throughout the duration of their illness.”

The plane will transport the rest of the Canadian passengers to the Canadian Forces Base in Trenton, Ont., where they will be in a 14-day quarantine, “out of an abundance of caution.”

The cruise line will be assuming the cost of the plane charter, Champagne said.

Speaking to CNN on Sunday, Keane Li said that his parents, who are on the cruise ship, have described it to him as a “plush prison.”

Michael Zrobin, a Canadian aboard the ship, told CTV News Channel on Sunday that, although they’ve been receiving updates on the situation from the ship’s captain, they haven’t been told the nationalities of the two passengers who tested positive for the virus.

Another passenger, Urbain Vanier, told CTV News Channel he had been monitoring his temperature “ever since we’ve been on this cruise.”

As the cruise ship passengers prepare to come home, federal health officials say they are also asking premiers to notify them of any shortages in supplies or issues they are facing in tackling COVID-19 in their own provinces, ahead of Friday’s upcoming first ministers meeting in Ottawa.

Hajdu said that “some provinces are indicating that they have deficits,” though she did not provide specifics.

“We have said all along that we will be there as the federal government to support them with the resources they need,” she added, “whether those are financial resources, or practical resources … kits, personal protective equipment.”

The most recent new cases announced in Ontario on Monday are all travel-related, health officials said. One patient, a man in his 50s, recently travelled to Germany and the other two cases are a man in his 80s and a woman in her 70s who were recently in Iran. All are in self-isolation.

When asked why no sterner warnings regarding travel on cruise lines had been delivered before Monday, Tam said that officials are “constantly learning” as the virus spreads.

“The global situation changed quite rapidly, even from the time of the Diamond Princess cruise ship to now,” she explained.

The Diamond Princess is a cruise ship that became an early breeding ground for the virus. It was put under quarantine by Japanese officials for two weeks in February while it was docked outside of Yokohama, Japan. More than 700 people on the ship contracted the virus.

American passengers on board the Grand Princess will be taken to quarantine facilities in California after they get off of the ship, but it was not immediately clear what would happen to international passengers who are not Canadian.

With files from the Canadian Press