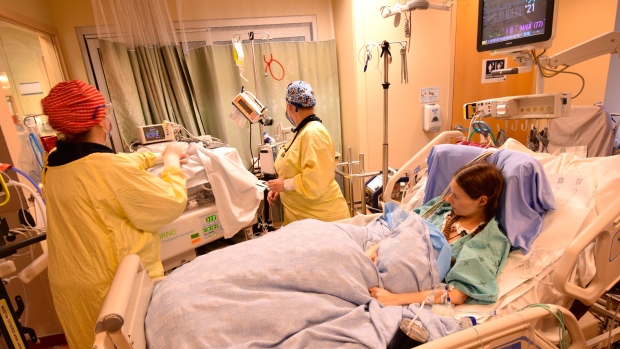 TORONTO — It’s a tale for the medical history books — a pregnant woman with pulmonary hypertension being sustained for weeks on a specialized life support mostly used for COVID-19 patients, all to hold off a necessary lung transplant long enough for a team to deliver her premature baby.

Doctors are saying it’s a world first, and a wild ride for both the family and the team that gathered to see mother and child through it safely.

Earlier this year, 37-year-old Candice Cruise was given an explanation for why she was struggling with an increasingly worsening shortness of breath: she had a disease called pulmonary hypertension.

“I felt that I was dying, and I had two masks on my face just to keep my oxygen up and it wasn’t doing anything,” Cruise said. “So that was the scariest.”

It’s a rare disorder in which the blood pressure in the arteries that feeds blood to the lungs and heart becomes dangerously high, putting pressure on the heart. It can be fatal.

Receiving such a diagnosis would be scary for anyone. But Cruise had more than just her own life to worry about — she was pregnant when the diagnosis came.

“We usually counsel moms who have severe pulmonary hypertension not to become pregnant or to end their pregnancies early when it’s safe to do so, so that they don’t put their lives at risk,” Granton said.

But Cruise was 21 weeks along.

She said the situation was “heartbreaking.”

“Because at that point, I could already feel him moving and I felt the connection with him already,” she explained.

Complicating things further was that a termination in a pregnancy this far along could jeopardize Cameron’s precarious health.

“We didn’t really want to end the pregnancy prematurely in case that destabilized her,” Granton said. “And so we began to wonder, you know, can we see this through and can we just let nature sort of take its course and see if we can carry her along — and then we realized we could.”

Doctors at Toronto General Hospital decided to try to find a way to keep both mom and child alive until the baby was big enough to deliver.

So they put Cruise on a form of ECMO life support — a tool that has been crucial during the pandemic to sustain COVID-19 patients incapable of getting oxygen into their blood.

“We’re equipped for it, but this was a completely different way of using ECMO,” Dr. Shaf Keshavjee, director of the Toronto Lung Transplant Program, told CTV News.

“This was a unique configuration, because she has a very specific problem. She cannot pump blood across the arteries in her lung anymore. And so what we did is used a low pressure ECMO system called Novalung for her right heart to pump blood around her lungs to the left side of her heart, which would send it to the rest of her body.”

How it worked was that in her chest were two tubes, delivering oxygen and pumping blood from one side of her heart to the other, to take pressure off the heart.

“Almost immediately, the heart can kind of just breathe a sigh of relief it doesn’t have to pump as hard against that wall of higher resistance blood vessels,” Keshavjee said.

“It hadn’t been done before […] so there’s a bit of anxiety or nervousness about, but we tried.”

For seven long weeks, Cruise stayed in the ICU hooked up to this machine in order to buy her baby time. She couldn’t sleep, but she persisted — the only patient on life support in the Toronto General Unit who didn’t have COVID-19.

At that time, in late April, the ICU was dealing with a record number of COVID-19 patients.

“It was a crazy time,” Granton said. “We had up to 35 ECMO [in use], which was the highest number anywhere in the world.”

Cruise grew close to the nurses, who helped her cope during those difficult weeks.

In early June, when the baby was 29 weeks old, Cruise’s condition was showing signs of worsening. It had been long enough that the baby was thought to be viable, although he would be premature, and doctors decided to deliver him — all while preparing for the possibility that Cruise would worsen during the procedure.

So a team of doctors from the pulmonary unit at Toronto General, high-risk obstetrics from Mount Sinai and neonatal teams from Sick Children’s hospital to care for the premature baby, prepared for the delivery.

“We were all worried,” Dr. John Snelgrove, with Mount Sinai, told CTV News. “None of the team members had a guidebook or a rulebook to follow with respect to what to do in this case.”

He explained that while they have seen people who have pulmonary hypertension and are pregnant, they’ve never seen a case like Cruise’s in terms of the extent of her illness and how far along she was in her pregnancy.

“This was the most severe case I’ve ever seen,” Snelgrove said. “We had to use all the resources of the team to come up with a strategy and a plan, but there was no kind of precedent for this exact scenario.”

On June 10, the combined effort of the team paid off, and doctors delivered the one-pound baby by C-section, with his mother still on life support.

Snelgrove said it was a “very emotional experience.”

“Everyone was crying, but tears of joy,” he said. “Here’s somebody who has persisted and persevered over seven weeks in the ICU on an external corporeal life support device that had really not been tested in pregnancy.”

It was an intense experience for Cruise too, being able to hold the baby she hadn’t been sure would survive.

“It was such an amazing moment for me because I didn’t think I was gonna see him at all,” she said. “I don’t even — I can’t even find the words.”

Having saved her son’s life with him in a neonatal ICU, Cruise now had to save her own by waiting — back on life support again — for a lung transplant.

“She’s a remarkable woman,” Granton said. “She described herself as an anxious person, but she was as cool as a cucumber. I’ve never seen anybody just settle in and say, ‘OK, we’ll do whatever it takes to get through this.’”

Within four weeks, she got her chance.

Now three months later, after a successful double lung transplant, she is home with her husband Collin and daughter Caitlyn, with new lungs and a healthy baby boy.

Her husband says that the new baby is a fighter, just like his mom.

“We put all of our trust in the doctors,” he said. “It’s nice for someone to know things can turn out good.”

“I’m happy and I’m walking around,” Cruise said. “Got a little baby to take care of now and it’s been, it’s been wonderful.”

The process wasn’t easy, but now that it’s been done, the strategy might be transferrable to other high risk cases in similar dire straits, doctors believe.

“We were able to show that we know we could support both baby and mom to a point where the baby was reasonably mature, and could have a reasonable chance of survival,” Granton said.

“I think it demonstrates what can be done,” he said, adding that this would never be a plan they would enact needlessly, but could be a way to help someone who is, like Cruise, far along in a pregnancy and is suffering from a similar health condition.

The story is unique not only for the incredible medical effort, but for the overwhelmingly positive outcome, a rare story during this pandemic.

“To have a healthy mom and healthy baby after this whole journey, it’s just incredible, and to survive to a lung transplant, as well is amazing,” Granton said. “I don’t think that’s ever, ever happened.”

Cruise is sharing her story, she says, to show she helped doctors pioneer a new approach for women with this disease — an approach that saved not just one life but two.