TORONTO — Experts say loss of smell is one of the most common symptoms of COVID-19 and can be a frustrating experience, particularly for long-haulers. But two Canadian entrepreneurs have developed a smell recovery program​ to help patients regain the sense.

Sniffly’s smell training program launched in early July and since then, the company’s founders say they’ve seen over 1,000 registrations, mostly from referrals from doctors.

The co-founders of Sniffly, Bobby Rasouli and Armin Faraji, both struggled with losing their sense of smell after testing positive for COVID-19 last year.

“It was a really rough experience for me,” Rasouli told CTVNews.ca over a Zoom interview on Thursday. “When I started looking into it and doing research about it, I realized that there are options and there are things that can be done at home, therapeutically.”

A review of data involving over 8,400 people with COVID-19 published in June 2020 found 41 per cent experience some sort of loss of smell.

While most eventually regain their ability to smell, a European study from January found that around five per cent of the more than 2,500 COVID-19 patients studied continued to experience a compromised sense of smell after six months.

Smell training, or olfactory training, was first developed by German smell researcher Thomas Hummel in a 2009 study. It involves training the human body’s olfactory system to strengthen the sense of smell, according to Hummel.

After coming across Hummel’s paper and learning about olfactory training, Rasouli, who had recently graduated from medical school in the U.K., gave it a try and started to see improvements.

“My sense of smell and taste slowly started coming back about a month after my COVID infection, but then using the smell therapy, I was actually able to be at 100 per cent at maybe three weeks afterwards,” Rasouli said.

Rasouli teamed up with Faraji, who has a background in marketing and previous experience in creating online courses, to create Sniffly and share their knowledge about smell training with the public.

“We just realized that we could basically take some of the learnings we’ve gathered from the medical research that Bob’s done and the journals that he’s viewed, and actually apply it to creating a virtual program that anyone can access,” Faraji said on Thursday during a Zoom interview with CTVNews.ca.

Sniffly is structured as a free, online course consisting of 17 videos. In the videos, Rasouli explains the mechanisms behind the olfactory system and talks about the science behind smell training as a way to “take some of the weight off of family physicians.”

“We tried to create a platform that educates, so that’s the first thing that we aim to do. We give a breakdown of the basic anatomy and physiology involved with smell and taste,” Rasouli said.

The smell training itself involves smelling four different types of essential oils — rose, eucalyptus, lemon and cloves. These were the four smells Hummel identified in 2009. Sniffly participants are asked to smell each essential oil for five seconds for a set of three times, repeated twice a day. 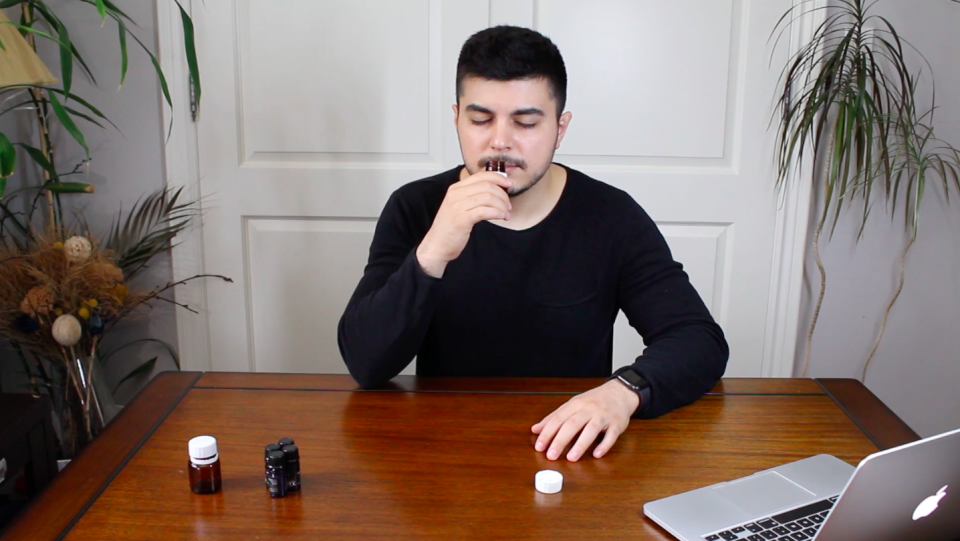 In this screenshot from one of the Sniffly videos, Rasouli demonstrates how to smell the essential oils for smell training. (Armin Faraji/Sniffly)

However, it can take months before participants notice improvements, Faraji explained.

“I’ve been smell training myself for about seven months, and the progression has been slow, but I’ve been able to actually measure the impact and see the improvements noticeably,” he said.

“We’ve heard from patients that have had improvements after four to six months of smell training.”

The scientific theory behind smell training relies on neuroplasticity, which refers to the brain and the nervous system’s ability to strengthen smell by forming networks and making new connections. Rasouli says smell training targets the olfactory bulb, which is the structure of nerves that creates the sense of smell for humans.

“The general consensus is that through the inflammatory damage that’s done to the olfactory bulb, your sense of smell and by extension, your sense of tastes are reduced. And so, what we aim to do is to regenerate those nerves,” Rasouli said.

Rasouli likens smell training to working out a muscle to make it stronger or rehabilitate after an injury.

While there is scientific theory behind olfactory training, Dr. Jay Piccirillo, an ear, nose and throat specialist at Washington University School of Medicine in St. Louis, Mo., says it’s still unclear how effective it is.

“The theory of neuroplasticity is well-accepted. With regards to its application as olfactory training, the jury is out,” Piccirillo told CTVNews.ca in a Zoom interview on Wednesday.

THE DATA BEHIND SMELL TRAINING

Smell training has shown promising results in a few studies conducted prior to the COVID-19 pandemic. In Hummel’s study, 10 out of the 36 participants (28 per cent) that underwent smell training showed improvements. This result was compared against a group of 16 participants that had no smell training where only one participant (six per cent) from this group naturally recovered their ability to smell.

However, Piccirillo notes that a “gold standard,” double-blind, placebo-controlled randomized trial has not yet been conducted, leaving many unanswered questions about the technique.

“We have lots of people … who after doing olfactory training say that their smell has improved. Well, how much of that is natural recovery? How much of that could have happened just by sniffing cotton without any essential oil on it?” Piccirillo said.

Rasouli acknowledges that there isn’t enough research to definitively say that smell training will work for everyone.

“In terms of giving patients a definitive ‘yes, this will help you,’ there needs to be more research done,” he said.

Piccirillo and his research team have also been studying the effectiveness of olfactory training. They’ve been looking into whether using different smells beyond the four that Hummel identified, as well as if looking at a picture of the object they’re smelling while doing olfactory training, can improve results.

The study is currently in clinical trials and Piccirillo expects to have results within a month.

“We’re going to assess everybody’s performance with a scratch-and-sniff smell identification test, as well as questionnaires about how much changed they feel that had,” said Piccirillo. “That’s our trial.”

Despite inconclusive data, Piccirillo says people dealing with loss of smell due to COVID-19 should still give smell training a try, given that there are no downsides.

“It’s not very expensive to do. It doesn’t take much time. It’s not going to hurt. And we really don’t have anything else for these patients,” said Piccirillo.