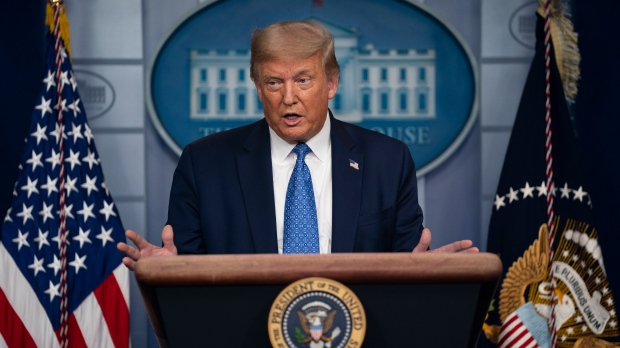 TORONTO — The Canadian doctor behind the cognitive test Donald Trump recent took says the U.S. president’s results are “normal performance,” adding that the assessment is not an intelligence or an IQ test.

Dr. Ziad Nasreddine, who developed the Montreal Cognitive Assessment (MoCA) in the early 1990s, told CTVNews.ca that the 30-question test is used as a screening tool to identify cognitive dysfunction, including early signs of Alzheimer’s disease and other forms of dementia.

“The average score for normal individuals is 27, the cut off for normal is 26 so anything above 26 is considered normal. When [Trump] got 30 out of 30 on the test, it’s still considered to be normal performance,” Nasreddine said in a phone interview on Thursday.

However, Nasreddine admitted that not everyone gets a perfect score.

“Only 10 per cent of normal individuals get 30 out of 30, most of them get 27. So maybe that is why he’s saying that he ‘aced it’ because he got a perfect score on it,” Nasreddine said.

The MoCA test includes various questions that are meant to assess a person’s brain function.

“It works by asking the patient different questions and each question or task that the patient has to do is related to a different neuroanatomical area in the brain,” Nasreddine said.

By going through 30 different questions, Nasreddine explained that doctors are scanning the brain to evaluate its ability to make decisions, remember, concentrate and learn new things.

For example, Nasreddine said the test-taker may be asked to draw an analog clock, including the numerals for each hour, and to then draw the minute and hour hands set to a specific time.

The test-taker might also be asked to explain the similarities between two objects, or may be asked to identify various animals.

In one of the more difficult tasks, Nasreddine said the person will be given five words to remember at the beginning of the exam, and will then be asked to recall them at another point in the test.

“Later on we asked them, after five to 10 minutes, what those five words were to help assess short-term memory,” Nasreddine said.

Trump has been boasting specifically about the five-word memory challenge, saying it proves he has the “mental stamina” to lead the U.S.

“And they say ‘That’s amazing. How did you do that?’ I do it because I have, like, a good memory. Because I’m cognitively there,” Trump said.

Nasreddine explained the test should be straightforward for anyone who is not suffering from cognitive dysfunction.

“The test is meant to be a quick, cognitive screen that takes 10 to 15 minutes to administer. It should be easy for someone who has no cognitive impairment. It’s not a sort of intelligence test,” Nasreddine said.

Trump also took the MoCA test in 2018, after which the president’s doctor said he got 100 per cent, calling the president “very sharp.”

Nasreddine said it makes sense that Trump was recently advised to take the test again, given his age.

“We know that, after 70, that cognitive disorders become more and more prevalent, so I think because the candidates are in their 70s, including Biden and Mr. Trump, it is pertinent to do the test because one in four people — 25 per cent — will usually have cognitive impairment or dementia,” Nasreddine said.

Nasreddine designed the MoCA test 20 years ago as a “more comprehensive” replacement for other dementia screenings.

However, scoring under 26 on the exam does not automatically mean a person has diminished cognitive capacity. After someone takes the test, physicians will discuss the results and determine whether the patient should begin further testing, such as brain scans or blood tests, to confirm a diagnosis.

Despite some critics calling the test “too easy,” Nasreddine says he is glad the recent media attention is shining a light on brain disorders.

“It is very prevalent at age 75 and older so it is not impertinent to be speaking about cognitive abilities and cognitive dysfunctions,” he said.