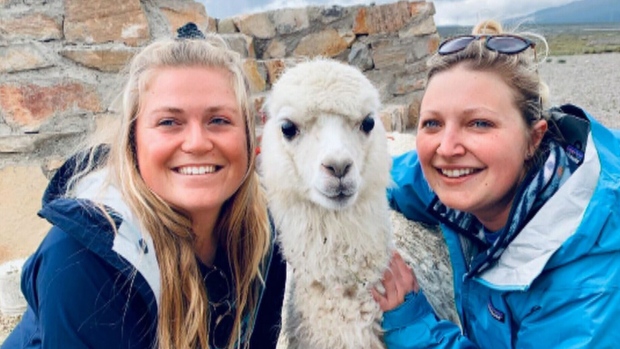 TORONTO — Danielle Hennink and Cathryn Edgar travelled to Peru for a once-in-a-life trip to Machu Picchu. But before the pair from Paris, Ont. could reach the breathtaking Inca citadel, Peru’s government imposed a nationwide lockdown and cancelled all international flights for at least 15 days.

“There’s absolutely nothing you can do,” Edgar, who is now in isolation at an AirBnb with her tour group, told CTV News.

As dozens of countries suspend international air travel in hopes of halting the global spread of COVID-19, some Canadian travellers who left home before the outbreak exploded find themselves trapped overseas with no clear sign of when they can come home.

McGill professor Anthony Williams-Jones travelled to Morocco with five of his students for a geology field trip. On Sunday, Morocco’s Ministry of Foreign Affairs announced that it was suspending all international passenger flights to and from the country “until further notice,” though 100 “exceptional flights” have since been allowed to repatriate tourists.

But, for the moment, Williams-Jones and his students are stuck.

“I don’t think there’s any way of leaving the country now,” he said.

Global Affairs Canada issued a blunt warning to Canadian travellers on Saturday urging them to come home while the still have the chance.

“Airlines have cancelled flights. New restrictions may be imposed with little warning. Your travel plans may be severely disrupted and you may be forced to remain outside of Canada longer than expected,” the ministry said in an email to registered Canadians abroad.

Canada has imposed its own travel restrictions. Foreign travellers from anywhere except the U.S. will be banned from entering Canada, and any Canadians travellers exhibiting symptoms of COVID-19 will not be allowed to board flights to Canada.

Airlines have also clamped down on travel. WestJet announced that it will stop all international and U.S. flights on Sunday at 11:59 p.m. for the next month.

The federal government has also offered financial assistance for Canadian travellers, offering emergency loans of up to $5,000 to help them come back home.

Snowbirds Lily Hrabchak, 71, and her husband Tommy Hrabchak, 86, are fighting to stay put in Florida, despite the fact that their insurance provider is stopping medical coverage after March 23.

The Toronto couple said they don’t want to come home right now in case they expose themselves to the virus at the airport or on the plane.

“To have a gun put to my temple telling me that you’ve got close up you shop, you’ve got to pack up, and you’ve got to take your loved one into a potentially dangerous situation — why would they even want to do that?” Hrabchak said.

Graduate student Joseph Nesrallah is set to return to Canada from the United Kingdom on Wednesday. His top concern: his health.

“The priority is making sure I stay healthy, I’m able to board the flight and I’m able to make it back to Toronto,” he said.

As of Tuesday night, eight Canadians have died of COVID-19 and 598 have been infected. The coronavirus has now infected more Canadians than SARS did back in the early 2000s.