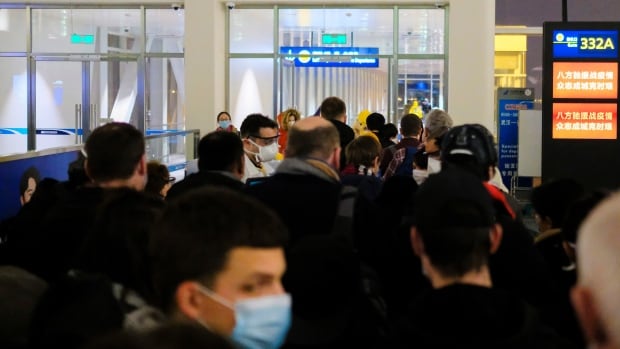 Canadians trapped in the coronavirus-affected region in Wuhan, China could be able to leave starting Thursday, but not all who registered are guaranteed a seat on the first flight out, according to Canadian officials.

Global Affairs Canada sent an email to Canadians in the region overnight saying a government-chartered flight is expected to leave Wuhan Tianhe International Airport in the early morning of Feb. 6.

“Due to demand and the restrictions associated with this flight, we cannot guarantee that everyone who is eligible for a seat will be able to board the plane,” notes the email, a copy of which was obtained by CBC.

“You should make plans for the eventuality that you are not able to board the plane.”

A government official cautioned that a departure time is not confirmed, as Canada is still awaiting final approvals for entering restricted air space from the Chinese government.

Foreign Affairs Minister François-Philippe Champagne announced on Twitter Tuesday that the plane has departed for Hanoi, Vietnam, and will carry on to China from there when final approvals are granted.

Prime Minister Justin Trudeau stops to answer questions about the government’s plans to evacuate Canadians and others from Wuhan, China. 0:44

Prime Minister Justin Trudeau said right now, a larger number of people have requested to be on the evacuation flight than there is space on the plane.

“That’s why we have already got an option on the second plane,” he said before a cabinet meeting Tuesday. “Though we’ve already seen the experience of the countries that sometimes people who want to come aren’t able to make it to the airport. So we’ll make a decision based on how full the plane is when we come back, whether or not we exercise the option of the second plane.”

The opposition Conservatives have suggested there has been a delay in the airlift operation due to strained diplomatic relations between Canada and China, but Trudeau rejected that claim Tuesday.

“China is being fully co-operative with Canada. There’s just a lot of processes to make sure they can get through the local quarantines on their way to the airport; that all the proper paperwork is filled out; that identities are verified and triple verified,” he said.

Heather Jeffrey, a senior official with Global Affairs Canada, told a committee of MPs studying Canada-China relations that the evacuation has “unique challenges,” including overflight clearance and visa requirements.

Jeffrey said Canada extends consular services to Canadian citizens and permanent residents in cases of natural disaster or humanitarian situations. In the case of Wuhan, the Chinese government has been firm on only allowing foreigners to leave, and has only made an exception so far for permanent residents to leave in order to accompany minors who are Canadian citizens.

“We recognize it is an extremely difficult situation to be confined and to not have an opportunity for departure,” she said.

Jeffrey said there are now 565 Canadians registered in the Hubei province of China, where cities like Wuhan and others are now under lockdown.

On Monday, Champagne said there are 280 Canadian passport-holders and 24 others who want to board the chartered flight. He told reporters he will provide an update on the evacuation after the cabinet meeting.

Minister of Health Patty Hajdu discusses Canada’s plan to bring back Canadians stranded in China’s quarantine zone. Two Democratic strategists weigh in on the Iowa caucus and what tonight’s result could mean for the Democratic nomination. MPs debate the proposed Teck Frontier oil sands mine in Alberta. 1:33:50

His cabinet colleague, Health Minister Patty Hajdu, told CBC News Network’s Power & Politics on Monday the chartered plane can take about 250 people, including crew. A second chartered plane has been secured to transport people if it is required, she said.

Canadian officials said permanent residents of Canada with Canadian children will be allowed to leave Wuhan on a government-chartered flight.

Hajdu said China will only make an exception for non-citizens travelling with a Canadian minor who would otherwise be unaccompanied.

“In that case, China has agreed to allow a permanent resident or a Chinese citizen to travel with that child who is a Canadian,” she told Power & Politics host Vassy Kapelos.

Hajdu said China continues to take a hard line on other cases in an effort to contain the disease.

Travellers with symptoms of coronavirus will not be allowed to board the Canadian plane. Each person will only be allowed to bring one carry-on, according to the email.

Federal officials are now on the ground in Wuhan to co-ordinate the airlift. All staff taking part in the airlift will be wearing protective gear.

The federal government will absorb the costs of the airlift and quarantine for the passengers.

“This is what Canadians do. We help each other,” Hajdu said. “We’ve got 300 Canadians stuck in a quarantined city where life is becoming incredibly difficult, if not almost impossible, in some situations.”

WATCH | What we know about the new coronavirus so far:

The number of cases of the new coronavirus has climbed to more than 20,000 worldwide, with more than 400 deaths. There have been four cases in Canada to date — three in Ontario and one in British Columbia.

Canada’s Chief Public Health Officer Dr. Theresa Tam said developing a vaccine could take up to a year. For now, she said, the best way to prevent the spread of the virus is to restrict its transmission.

On Sunday, Global Affairs Canada announced that the Canadians to be evacuated from Hubei province where the outbreak originated, as well as government officials and air crew involved in the airlift, will be quarantined for two weeks at the Trenton, Ont., military base upon their arrival in Canada as a precaution.

The WHO has declared the coronavirus outbreak a global health emergency, but has praised China for its efforts to contain the virus.