TORONTO — She used to be an avid hockey player and long-distance runner, but now 15-year-old Kayleigh McCue’s active life has slowed to a crawl.

McCue is struggling with a syndrome that follows infection with COVID-19, just one of a growing number of children and teens who are presenting with what appears to be a pediatric version of long-haul COVID-19.

“It’s really stressing me out, not knowing what’s going on, and it’s scary,” she told CTV News.

McCue was sick for three weeks last fall with COVID-19, experiencing a fever and a general sense of malaise. Her father, Chris, and a brother were also struck with the virus.

But she was the sickest.

“I had like, basically every symptom there was,” she said. “Nausea, vomiting, headaches, shortness of breath, loss of taste, loss of smell — most of the symptoms.”

Her mother, Desiree, told CTV News that while other members of the family just felt ill and had headaches and tiredness, the 15-year-old was struggling more.

McCue improved somewhat, but then developed fatigue, vomiting and strange rashes in the spring.

“The ones on the face look like scratches,” Desiree said of the rashes. “The other ones looked like kind of bruises.

“We were terrified because it was all over her chest, neck, her face. She actually turned and said, ‘Mom, I feel like a monster.’”

The family first noticed it in March. When the symptoms got worse, they took her to see a doctor, who called for bloodwork to be done.

But everything came back normal.

Doctors had no answers, with some even blaming it on self-harm. But her mother says she saw the rashes appear on their own while McCue was watching TV. 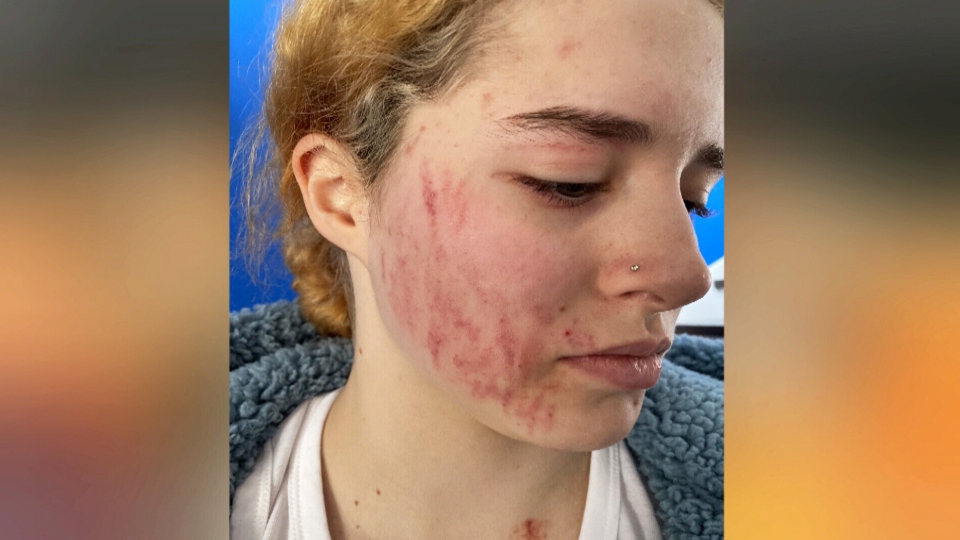 McCue felt abandoned, with no one to believe her.

“As a parent, [it] breaks your heart,” her mother said. “It’s been a struggle. And she has had more panic attacks, which is — I’m not surprised. They are telling her she is hurting herself.”

McCue had to start attending school only part-time while her family doctor searches for a specialist in Canada to tackle the mystery.

And it turns out that many other families are in the same predicament.

Support groups are now emerging in the U.K., the U.S. and now in Canada, called Long COVID Kids Canada, which now has nearly 100 members and growing, some reporting similar symptoms to McCue and some with additional problems, including problems walking, seizures and fainting spells.

The support group’s online accounts were set up by Susie Goulding, who also struggles with long COVID-19 symptoms.

“There’s a big demand for support for these children,” Goulding said. “We’re finding more and more kids are coming out with long-haul symptoms.”

Although cases of long-haul COVID-19 in children in Canada have been documented before — with several families sharing their stories with CTVNews.ca last summer — Canada has little data on just how common this could be.

According to Long Covid Kids, data from England found that out of roughly 617,000 children who had tested positive for COVID-19, around 50,000 kids aged 0-19 still experienced long COVID-19 at 12 weeks.

Goulding said that sometimes it takes families a while to connect symptoms back to a mild COVID-19 case that a child may have had months earlier, especially since if a case wasn’t serious, parents wouldn’t expect it to linger.

“They didn’t start off having severe cases with respiratory issues that would cause hospitalization, but in fact, some of these cases that are asymptomatic can end up being cases of long COVID and end up having devastating effects,” she said.

“It’s our hopes that in having this group, we’re going to be able to reach out to more people. It seems like Canada has been really far behind in its struggles and finding support for long haulers, even with adults.”

McCue’s mother has joined the Canadian group. She said that after she shared her daughter’s experience, they received a hugely validating response from others who were struggling with similar cases.

“The replies we got, I was bawling my eyes out and so was she,” she said.

“Other people saying, ‘Yes, we were told my daughter is hurting herself, yes, we’ve seen this, yes, you’re not alone.’”

Patients connecting with each other is the first step. The second? Using their numbers to raise awareness and mobilize medical help.

Currently, few doctors in Canada are focusing on this very new condition.

The C.S. Mott Children’s Hospital in Ann Arbour, Mich., is among the first in North America to set up a specialized clinic for long-haul COVID-19 in kids.

Dr. Ixsy Abigail Ramirez, a pulmonologist at the hospital, told CTV News they started getting a lot of referrals from family doctors in spring 2021, and these referrals were often for children who had no previous serious health problems.

As the referrals increased, they found themselves having to consult more specialists in other areas to deal with the issues the children were presenting with.

Ramirez said they put together the clinic to provide that comprehensive care.

“I mean there’s still a lot of unknown out there,” she said. “These are previously healthy kids who were doing their daily activities playing who now all of a sudden have this limitation on their day to day activities.”

The clinic has treated several hundred young patients in the past two months with steroids for breathing problems and physiotherapy. They have a team of specialists on staff.

Ramirez said that shortness of breath is the main thing that patients are noticing.

“It’s the kind of most common lasting effect,” she said. “Chest pain can sometimes be another common symptom, as well as fatigue.”

The clinic has only existed for a couple months, so doctors are still catching up and searching for a road to recovery. So far, they’ve found most symptoms linger in children struggling with long COVID-19.

“Most of the patients that we have, the symptoms are still lingering at this point,” she said. “So we don’t know yet if there’s going to be an endpoint to some of these patients in terms of how they feel in those symptoms.”

How common long COVID-19 is in children and how to find an endpoint are serious questions. Because children are far less likely to suffer severe outcomes from COVID-19, their struggles haven’t been the focus. But depending on how many children are affected by long-haul COVID-19, the issue could be huge — almost 270,000 children aged 19 and under have contracted COVID-19 at some point in Canada.

Ramirez and her clinic are hoping to run studies in search of answers to the many questions about long COVID-19.

“Will this ever get any better, or is this — I hate to use the phrase, but — is this my new normal?” Ramirez said she’s been asked. “We really just don’t have a good answer for these families.”

That uncertainty is something that Desiree struggles with.

“When it’s your baby, and you don’t know how to help them, you just — I ended up having to go for counselling, because I felt helpless,” she said.

She added that the other *three kids in the family have asked if their sister is going to be OK.

Canadian kids need help and recognition too, something that support groups are hoping to bring attention to.

“We were just calling out to government groups to be able to notice and acknowledge that children are suffering, and they’re suffering from COVID, as well as becoming long haulers themselves,” Goulding said.

“That’s what we’re hoping — even one kid can see something like this and say, ‘Hey Mom, I’m not alone.’ And the more and more people speak up, then the more you know the doctors and the government can maybe put their weight behind it and help us,” Desiree said.

“I felt a little bit of relief because other people are going through the same things,” she said.