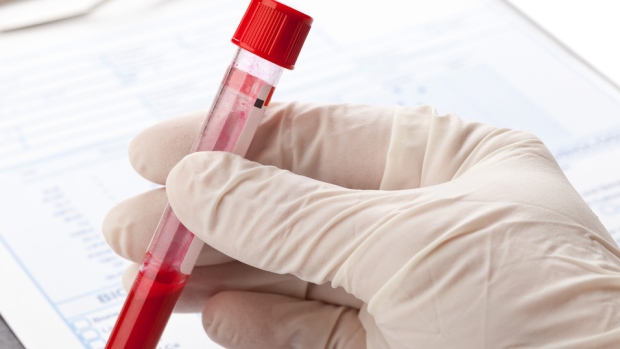 EDMONTON — Results from a study of a blood test that can detect more than 50 types of cancer suggest that it is accurate enough to be used as a screening tool among people at higher risk of the disease, including those who are not symptomatic.

In a paper published in the leading cancer journal Annals of Oncology Friday, researchers reported that the test accurately detected cancer, often before any symptoms were present, and delivered a very low false-positive rate.

The test also successfully predicted where in the body the cancer is located with a high degree of accuracy (88.7 per cent of cases) – a development researchers say can help doctors narrow down diagnostic testing and confirm a diagnosis sooner.

“Finding cancer early, when treatment is more likely to be successful, is one of the most significant opportunities we have to reduce the burden of cancer,” Dr. Eric Klein, first author and chairman of the Glickman Urological and Kidney Institute at the Cleveland Clinic, said in a press release.

“These data suggest that, if used alongside existing screening tests, the multi-cancer detection test could have a profound impact on how cancer is detected and, ultimately, on public health.”

The test, developed by U.S.-based company Grail, detects chemical changes in fragments of genetic code – known as cell-free DNA (cfDNA) – that leak from tumours and other cells into the bloodstream.

Using genomic sequencing, the test can detect chemical changes to the DNA called methylation that control gene expression. A classifier developed with machine learning then uses the results to detect abnormal methylation patterns that suggest cancer is present and narrow down where in the body those abnormalities lie.

The company promises results will be made available within 10 business days from the time the sample reaches the lab.

Speed aside, the latest study of the test suggests an impressively high level of accuracy, correctly identifying the presence of cancer in 51.5 per cent of cases across all stages of the disease.

During the study, scientists analyzed 2,823 people with the disease and 1,254 people without. The test wrongly detected cancer in only 0.5 per cent of cases.

The test’s ability to detect cancer in the blood such as lymphoma and myeloma, however, was 55.1 per cent.

“We believe that cancers that shed more cfDNA into the bloodstream are detected more easily. These cancers are also more likely to be lethal, and prior research shows that this multi-cancer early detection test more strongly detects these cancer types,” said Klein.

“Cancers such as prostate shed less DNA than other tumours, which is why existing screening tests are still important for these cancers.”

Researchers will continue to collect data from the test in large studies across the U.S. The company has also partnered with the U.K.’s National Health Service to pilot the test in approximately 165,000 eligible patients, starting later this year.

This isn’t the first cancer-detecting blood test to perform well in studies.

A similar test developed by Singlera Genomics found cancers in 91 per cent of people who showed no symptoms when the blood sample was collected but were diagnosed one-to-four years later with stomach, esophageal, colon, lung or liver cancer.

However, in a study published in July 2020, the authors studying the test cautioned that large-scale studies across long time periods are needed to confirm the potential of the test for early cancer detection.​