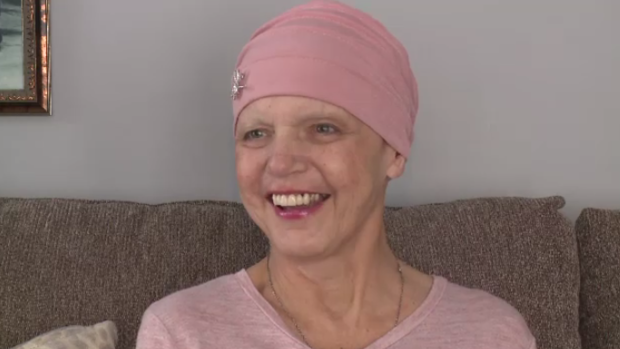 GEORGES RIVER, N.S. — A Cape Breton woman battling pancreatic cancer has raised more than $50,000 for the cause — and her efforts have earned her a nod from Alex Trebek.

Brenda McCarthy, a former nurse of more than 30 years, was diagnosed with Stage 2 pancreatic cancer last year — her second diagnosis since 2017. This time, it had metastasized to her liver.

McCarthy decided to fundraise to try and bring a treatment called stereotactic body radiation therapy to the Cape Breton Regional Hospital. She says it’s a treatment that could have benefited her after her first diagnosis, had it been available.

When McCarthy found out Trebek had been diagnosed with the same disease, she wrote him a letter to let him know he wasn’t alone.

She hoped they could share their cancer stories, and thought a call from the “Jeopardy!” host would boost her spirits — and her fundraising efforts.

Her dream came true when she received a call from Trebek himself.

“That was two survivors reaching out to each other, talking,” says McCarthy, who lives in Georges River, N.S.

“The conversation lasted all of maybe five minutes, but I could tell that he was very sincere and genuine. He commended me on my efforts, raising money for the community.”

McCarthy’s sister, Nancy Boutilier, was part of her fundraising team. She says hearing from Trebek lifted her sister’s spirits during what has been a trying time.

McCarthy has managed to raise more than $55,000 for the Cape Breton Regional Hospital Foundation, mostly through a fundraising event held at the Emera Centre in North Sydney in November.

“We really surpassed our goal and it was because of Brenda,” says her sister.

“It certainly has given me strength to know that I am capable of doing something good for other people,” says McCarthy.

As for her current status, McCarthy says she had a bad spell a few weeks ago, but is feeling better these days.

McCarthy is still undergoing chemotherapy and is determined to keep fighting — a sentiment she and Trebek shared during their phone conversation.

“We’re not going to let cancer get the best of us,” she says. “We’re going to live with it and we’re going to survive it ‘til … ‘til the end.”

Trebek told McCarthy that he had visited Cape Breton a few years ago and hopes to make a trip back to the island.

If he does, she hopes they can meet, but if not, she has no regrets.

“Cancer didn’t get the best of me,” she says. “I won against it. I won because I was able to help somebody else.”